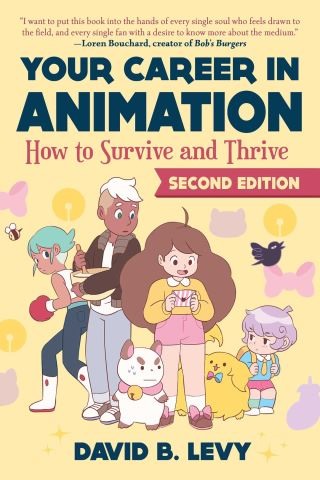 Your Career in Animation (2nd Edition)

How to Survive and Thrive

A Newly Revised Edition of the Go-To Guide for Any Animation Artist!

“Your Career in Animation is the most comprehensive and valuable book on animation careers that you’ll ever need.” —Bill Plympton, Animator / Producer

Whether you want to break into the animation industry or “toon up” to a better career, this comprehensive guide will show you how. A leading animation professional surveys the field and shares the advice of more than one hundred and fifty top talents in the business of making toons— including Brooke Keesling, head of animation talent development at Bento Box, Mike Hollingsworth, supervising director of BoJack Horseman; Andrea Fernandez, art director on The Cuphead Show! PES, Oscar-nominated stop-motion director of Fresh Guacamole; Linda Simensky, head of content for PBS Kids; Minty Lewis, co-creator of The Great North; Ross Bollinger, YouTube sensation with his Pencilmation channel, and executives from Nickelodeon, Disney TVA, Titmouse, Inc., Frederator, PBS Kids, Netflix, 9 Story Media Group, Cartoon Network; and dozens of others. Learn how to:

• Get the most out of your animation education
• Build a portfolio, reel, and resume
• Keep your skills marketable for years to come
• Network effectively
• Learn from on-the-job criticism
• Cope with unemployment
• Start your own studio or build an indie brand online
• Pitch and sell a show of your own
• And more!

Allworth Press, an imprint of Skyhorse Publishing, publishes a broad range of books on the visual and performing arts, with emphasis on the business of art. Our titles cover subjects such as graphic design, theater, branding, fine art, photography, interior design, writing, acting, film, how to start careers, business and legal forms, business practices, and more. While we don't aspire to publish a New York Times bestseller or a national bestseller, we are deeply committed to quality books that help creative professionals succeed and thrive. We often publish in areas overlooked by other publishers and welcome the author whose expertise can help our audience of readers.

David B. Levy: David Levy is the author of Your Career in Animation: How to Survive and Thrive, the first career guide for animation artists working in North America. Levy has been an animation director for six series to date, including Blue's Clues, Blue's Room, Pinky Dinky Doo, The Electric Company, and Assy McGee. On his own, Levy has completed six, award-winning independent animated films. Levy has served as President of ASIFA-East since 2000. He teaches animation at Parson's School of Design, The School of Visual Arts, and New York University's Tisch School of the Arts. He regularly lectures at Pratt Institute and the Rhode Island School of Design. In 2007, David Levy signed a development deal for his own series creation and developed a TV property for an independent producer.