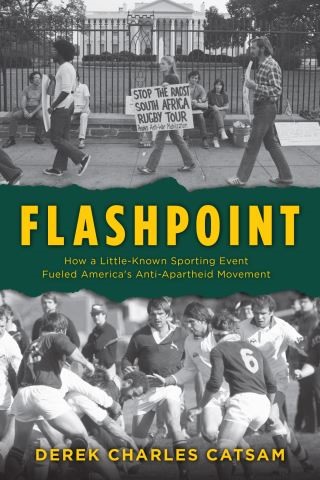 Forty years ago, a South African rugby tour in the United States became a crucial turning point for the nation’s burgeoning protests against apartheid and a test of American foreign policy.

In Flashpoint: How a Little-Known Sporting Event Fueled America's Anti-Apartheid Movement, Derek Charles Catsam tells the fascinating story of the Springbok’s 1981 US tour and its impact on the country’s anti-apartheid struggle. The US lagged well behind the rest of the Western world when it came to addressing the vexing question of South Africa’s racial policies, but the rugby tour changed all that. Those who had been a part of the country’s tiny anti-apartheid struggle for decades used the visit from one of white South Africa’s most cherished institutions to mobilize against both apartheid sport and the South African regime more broadly. Protestors met the South African team at airports, chanted outside their hotels, and courted arrests at matches, which ranged from the bizarre to the laughable, with organizers going to incredible lengths to keep their locations secret.

In telling the story of how a sport little appreciated in the United States nonetheless became ground zero for the nation’s growing anti-apartheid movement, Flashpoint serves as a poignant reminder that sports and politics have always been closely intertwined.

Derek Charles Catsam is professor of history and the Kathlyn Cosper Dunagan Professor in the Humanities at the University of Texas of the Permian Basin where he teaches courses on race, politics, and sports in the US and South Africa. He is the author of Freedom’s Main Line: The Journey of Reconciliation and the Freedom Rides and has published extensively on the history of race and politics in the US and South Africa. Catsam is a senior research associate at Rhodes University and serves as reviews editor of Safundi: The Journal of South African and American Studies. Most recently, he appeared in the award-winning PBS American Experience film Freedom Riders.