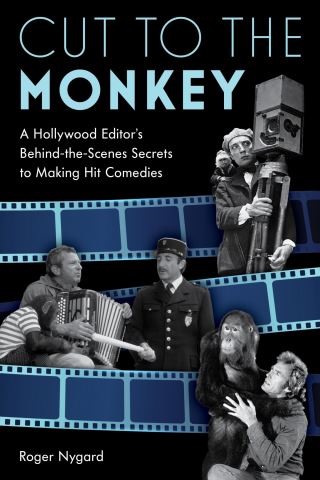 Cut to the Monkey

Cut to the Monkey is the story of a filmmaker's journey through Hollywood—revealing the techniques behind how the experts find the funny in any project—by a filmmaker who has worked with some of the funniest people in the business and has edited Emmy-nominated episodes from series such as Curb Your Enthusiasm, Veep, and Who Is America?

Nobody knows who first said, "Dying is easy, comedy is hard." But almost everyone in the film business agrees it's true. Roger Nygard shares his anecdotal experiences in television, features, and documentaries as a filmmaker and editor—struggles and successes any filmmaker can identify with. Nygard also includes tips for Hollywood professionals and fans alike on how to successfully navigate the business of being funny.

Along with a major focus on film editing, the author shares filmmaking stories that will leave readers feeling inspired and better prepared to deal with their own struggles. The book also features contributions about writing, creating, and editing comedy from some of the biggest names in the comedy business, including Judd Apatow (Girls, The 40-Year-Old Virgin), Alec Berg (Silicon Valley, Barry), Sacha Baron Cohen (Borat, Who Is America?), Mike Binder (The Upside of Anger, Black or White), Larry David (Seinfeld, Curb Your Enthusiasm), Julia Louis-Dreyfus (Seinfeld, Veep), David Mandel (Veep, The White House Plumbers), Jeff Schaffer (The League, Dave), Krista Vernoff (Shameless, Grey's Anatomy), and others.

Roger Nygard grew up outside Minneapolis on the shores of Lake Minnetonka. At age seven he discovered his father's 8mm camera has been making comedy films ever since. Nygard has directed TV series such as The Office and The Bernie Mac Show, and he has edited Emmy-nominated episodes of Curb Your Enthusiasm, Veep, and Who Is America? As an award-winning filmmaker and documentarian, Nygard has tackled serious topics in a humorous way, in films like Suckers, Trekkies, The Nature of Existence, and The Truth About Marriage.