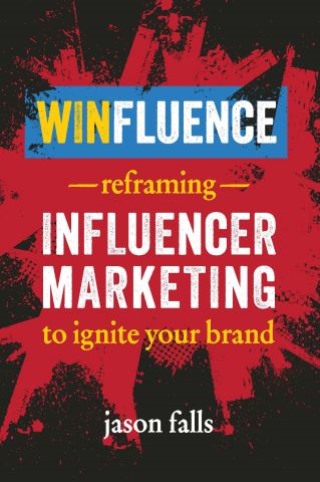 The average person in the U.S. spends two hours and four minutes on social media sites per day. The world average is actually twelve seconds longer than America’s time. At the same time, consumer trust in its former institutions of knowledge—the news media—is at an all-time low. Trust to do what’s right in the media dropped below 50% in the 2019 edition of Edelman’s Trust Barometer. So, where are people turning for reliable information and advice about life, about the world, and (yes) about products and services? Influencers.
Winfluence builds a case for influencer marketing and explains how to use it while providing predictive guidance to businesses and brands concerned with change management, cost concerns, and return on investment. The ideas and processes explained in the book will give 30 million or so business owners, their marketing teams, agencies, and consultants an edge to succeed with empowering the one media channel out there growing in trust and popularity.

Jason Falls: Jason Falls is a leading digital strategist, author, speaker and thinker in the digital and social media marketing industry. He is an innovator in the conversation research segment of social analytics, having published the first-ever Conversation Report in 2012. That work eventually led to him founding the Conversation Research Institute which mined online conversations for consumer insights for businesses of all sizes. An award-winning strategist and widely read industry pundit, Falls has been noted as a top influencer in the social technology and marketing space by Forbes, Entrepreneur, Advertising Age and others. A 2014 Forbes article named him one of 10 business leaders all entrepreneurs should follow on Twitter, along side Richard Branson, Mark Cuban, Tom Peters and Tony Hseih. Jason Falls is the co-author of two books: No Bullshit Social Media: The All-Business, No-Hype Guide to Social Media Marketing (Que 2011), co-authored with Erik Deckers; and The Rebel’s Guide to Email Marketing (Que 2012), co-authored with DJ Waldow. His third book is slated to be published in the summer of 2020. Falls is also noted for founding SocialMediaExplorer.com, the top marketing blog in the world according to AdAge’s Power 150 in October of 2010.