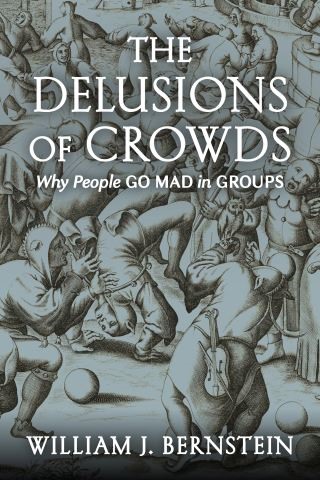 The Delusions Of Crowds

Why People Go Mad in Groups

From the award-winning author of A Splendid Exchange, a fascinating new history of financial and religious mass manias over the past five centuries

“We are the apes who tell stories,” writes William Bernstein. “And no matter how misleading the narrative, if it is compelling enough it will nearly always trump the facts.” As Bernstein shows in his eloquent and persuasive new book, The Delusions of Crowds, throughout human history compelling stories have catalyzed the spread of contagious narratives through susceptible groups—with enormous, often disastrous, consequences.

Inspired by Charles Mackay’s 19th-century classic Memoirs of Extraordinary Popular Delusions and the Madness of Crowds, Bernstein engages with mass delusion with the same curiosity and passion, but armed with the latest scientific research that explains the biological, evolutionary, and psychosocial roots of human irrationality. Bernstein tells the stories of dramatic religious and financial mania in western society over the last 500 years—from the Anabaptist Madness that afflicted the Low Countries in the 1530s to the dangerous End-Times beliefs that animate ISIS and pervade today’s polarized America; and from the South Sea Bubble to the Enron scandal and dot com bubbles of recent years. Through Bernstein’s supple prose, the participants are as colorful as their motivation, invariably “the desire to improve one’s well-being in this life or the next.”

As revealing about human nature as they are historically significant, Bernstein’s chronicles reveal the huge cost and alarming implications of mass mania: for example, belief in dispensationalist End-Times has over decades profoundly affected U.S. Middle East policy. Bernstein observes that if we can absorb the history and biology of mass delusion, we can recognize it more readily in our own time, and avoid its frequently dire impact.

William J. Bernstein: William J. Bernstein is a neurologist, financial theorist, and historian whose books include A Splendid Exchange, Masters of the Word, The Birth of Plenty, and The Four Pillars of Investing. He is the co-founder of the investment management firm Efficient Frontier Advisors, and has written for publications including the Wall Street Journal and Money magazine. He was the winner of the 2017 James R. Vertin Award from CFA Institute. He lives in Oregon.