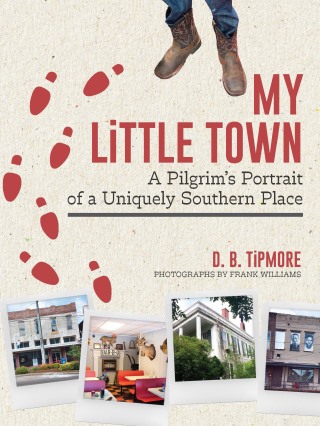 A Pilgrim's Portrait of a Uniquely Southern Place

Northern urbanite D. B. Tipmore describes the culture shock he experienced after moving to a small Alabama town in My Little Town: A Pilgrim's Portrait of a Uniquely Southern Place. From chicken salad to national politics, Tipmore shares the unique character of the South through the microcosm of his small town.

My Little Town turns the Yankee-comes-to-Dixie literary genre outside in, examining Lovelady, Alabama, through the eyes of someone who should never have been living there and yet found himself there for more than a decade. With a keen appreciation of its peculiarly Southern tableau, the book lovingly scrutinizes an Alabama village short chapter by short chapter, accompanied by photographer Frank Williams's images. Funeral visitations, poisoned soup luncheons, Pilgrimage hosting, supper clubs, family feuds, Obama Day parades, politics, Jews, and chicken salad recipes are all treated with a voice of singular precision and affection. Simultaneously author D. B. Tipmore couples this fresh view of Southern small-town life with his own narrative of a worldly urban nomad who hopes to find a home in one of the most isolated areas of the United States, peculiarly defined by its racial history and regional mores. By conflating the two stories, My Little Town challenges the reader as much as the author, raising serious questions about our ability as Americans to transcend our regional identities and cultural complexities.

David Tipmore: D. B. Tipmore began jotting down Christmas poems in a Big Chief tablet at the age of six and has been writing ever since. After graduation from the University of Michigan, he studied cultural anthropology at the University of Pennsylvania and then began a career in journalism at The Village Voice. He has contributed articles to local and national magazines while serving in administrative positions at the University of Miami in Miami, Florida, and Marion Military Institute in Marion, Alabama. Born in Indiana, he has also lived in Venezuela, Morocco, London, Paris, and Saudi Arabia. My Little Town is his first published work of nonfiction. He currently calls Selma, Alabama, home.