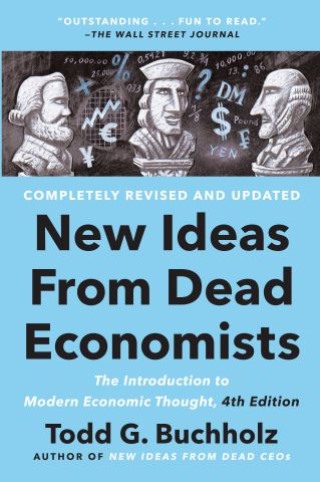 An entertaining and widely-praised introduction to great economic thinkers throughout history, now in its fourth edition, with updates and commentary on the 2020 “great cessation,” Trump and Obama economic policies, the dominance of Amazon, and many other timely topics.

In this revised edition, Buchholz offers fascinating insights on the most relevant issues of 2021: climate change, free trade debates, the refugee crisis, growth and conflict in Russia and China, game theory, and behavioral economics.

New Ideas from Dead Economists—found on the desks of university students, prime ministers, and Wall Street titans—is a riveting guide to understanding both the evolution of economic theory and our complex contemporary economy.

Todd G. Buchholz: Todd G. Buchholz is an internationally acclaimed economist and author. He has served as director of economic policy at the White House and managing director of the legendary Tiger investment fund. He has taught economics at Harvard University, where he was awarded the Allyn Young Teaching Prize by the Department of Economics; served as a Fellow at Cambridge University; and holds advanced degrees in economics and law from Cambridge and Harvard universities. He is the inventor of the Math Arrow matrix, and his writing has appeared in the Wall Street Journal, The New York Times, and Forbes, among other publications. He is also the author of New Ideas from Dead CEOs, From Here to Economy, Rush: Why We Thrive in the Rat Race, and The Price of Prosperity.