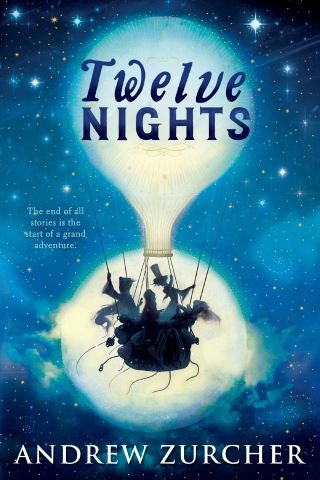 A magical tale of imagination, adventure, and the power of storytelling, perfect for fans of The Golden Compass and A Wrinkle in Time.

Kay's father has gone missing on Christmas Eve! And when Kay and her sister Ell go to his office, everyone he works with claims never to have heard of him. So later that evening, when Kay wakes up to find two mysterious strangers outside her bedroom window, talking about her father and looking for the last remnants of his existence, she demands to know what's happened to her dad.

The two strangers, Flip and Will, are wraiths, on a mission to bring Kay and Ell's father to their world--the world of woven stories and grand imagination that their father has spent his career studying. Only things in that world have gone very wrong, and the Bride of Bithynia, the only being who can set things right, is nowhere to be found. Can Kay and Ell find their father and join Flip and Will in a centuries-old battle to save the world?

Debut author Andrew Zurcher has created a world as captivating as Lyra's Oxford and Alice's Wonderland in this spellbinding quest of a novel.

"One for the bookshelf of any fantasy enthusiast." --Kirkus Reviews

Andrew Zurcher: Andrew Zurcher is Director of Studies in English at Queens' College, Cambridge, and a leading international expert on the works of Spenser, Sidney, and Shakespeare. Twelve Nights is his debut novel. Follow him on Twitter @andrewzurcher.