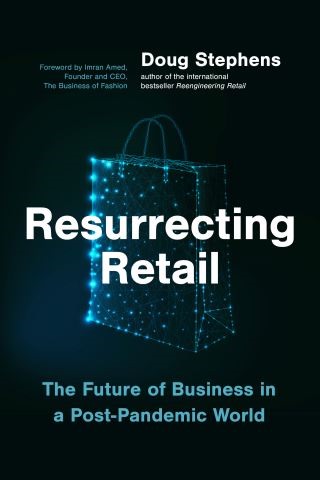 The Future of Business in a Post-Pandemic World

Few crises in modern history have so completely disrupted every aspect of daily life as has the Covid-19 pandemic. What began as a small medical ripple in Wuhan, China, a city many of us had never heard of, quickly erupted into a tsunami of epic proportions. Every market, industry, vertical, profession, service, and category of product was in some way rocked by its impact. And, for the first time in recorded history, every wheel, cog and gear in the global retail industry ground to a virtual halt.

From two-time, international best-selling author and futurist Doug Stephens, Resurrecting Retail is not just a riveting story of the unprecedented crash of an industry during this time of crisis but a roadmap for its rebirth. Meticulously researched in real time from inside the crisis, Resurrecting Retail provides a comprehensive and surprising vision of how Covid-19 will reshape every aspect of consumer life, including the very essence of why we shop.

Doug Stephens: Founder of the global advisory firm Retail Prophet, Doug Stephens is of the world’s foremost retail industry futurists, thought leaders and business influencers. His intellectual work and creativity have shaped the strategies of many of the world’s best-known retailers, agencies and brands, including IKEA, Walmart, Estée Lauder, BMW and Google. Prior to founding Retail Prophet, Doug spent over 20 years in the retail industry, holding senior international roles including the leadership of one of New York City’s most historic retail chains. He is the author of The Retail Revival: Re-Imagining Business for the New Age of Consumerism (2013) and the international bestseller Reengineering Retail: The Future of Selling in a Post-Digital World (2017), which has now been translated into four languages. Doug is also a featured columnist for The Business of Fashion and sits on multiple academic and corporate advisory boards, including the David Sobey Centre for Innovation in Retail & Services at St. Mary’s University. His unique perspectives on retailing, business and consumer behavior have been featured in many of the world’s leading publications and media outlets including The New York Times, BBC, Wired, The Financial Times, The Wall Street Journal and Fast Company.