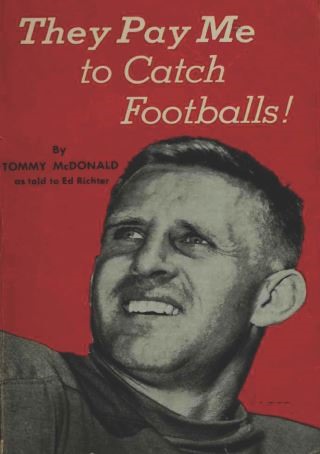 They Pay Me to Catch Footballs

Football’s premier pass-catcher, Tommy McDonald, says of himself, “I’m just a little guy in a big guy’s game.” This five-foot-ten-inch, 175-pound fireball has proved that speed, balance, and savvy are more than a match for the league of giants in which he plays!

Thomas Franklin McDonald (July 26, 1934 – September 24, 2018) was an American football flanker in the National Football League (NFL) for the Philadelphia Eagles, Dallas Cowboys, Los Angeles Rams, Atlanta Falcons, and Cleveland Browns. He played college football for the Oklahoma Sooners. He is a member of the Pro Football Hall of Fame and College Football Hall of Fame.