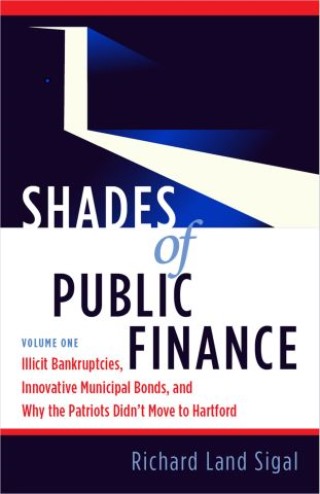 Illicit Bankruptcies, Innovative Municipal Bonds, and Why the Patriots Didn't Move to Hartford

"Using knowledge gained in fifty-plus years at the cutting edge of public finance, Sigal clears the smoke and moves the mirrors to let the rest of us see how it is done.... When they say it is not about the money, they are wrong. It always is. And the ultimate question is ‘whose money?’ " - Majorie Smith, Chair, New Hampshire House Judiciary Committee; former Chair, NH House Finance Committee and Joint Fiscal Committee

Shades of Public Finance Vol. 1 lifts the curtain on aspects of American civil and financial underpinnings that most people know little about. Local water treatment systems, state university campuses, roads, parks and many other features of our cities and states have been built with local control and local decision-making because imaginative figures like Richard Sigal found ways to turn community assets into cash through bonds. Sigal explains in clear language how bonds are structured, who gets rich, who gets stuck and how politics impacts bond financing. This book will answer these questions and more:

•Why the Patriots didn't move to Hartford;
•Why bankruptcy and a city manager in Detroit may not have helped the city;
•How we quietly abandoned the principles of Alexander Hamilton in 2016;
•How municipal bonds really work;
•And who really gets rich from your taxes and bonds.

"A great read for history and to grasp the importance of public finance experts in meeting everyday needs." ---Thomas Ritter, Chair, UCONN Board of Trustees; past Speaker of the Connecticut House of Representatives

Sigal was the bond counsel or underwriters' partner in charge of major tax-exempt or taxable bond issues in many states as well as the Commonwealth of Puerto Rico. During his career, Sigal crafted innovative, precedent-setting public finance structures, including the multibillion -dollar bond issue to finance the new capital needs of Puerto Rico and the first clean water bond program that leveraged federal water and sewer grants.

A graduate of Yale University (1960) and the University of Chicago School of Law (1963), Sigal’s contribution to the creation of financing strategies to support the growth of public infrastructure are unmatched. As Thomas Ritter, former Speaker of the House of Representatives in Connecticut says, "“Dick Sigal taught me that no matter how hard the legislature worked on a bill, that implementation isn’t complete without having a top-notch expert, like Dick, in public finance."

You can find Richard Land Sigal at his website: https://richardlandsigal.com/ and on LinkedIn.