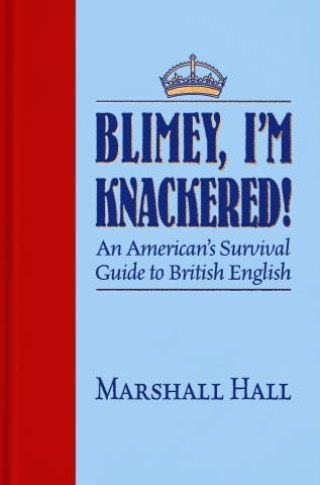 Back in 1887, Oscar Wilde wrote, “We have really everything in common with America nowadays, except, of course, language.” One would think, in a world homogenized by technology and social media, that differences between British English and American English would gradually disappear. Ask any recent traveler, though, and you’ll learn that plenty of linguistic idiosyncrasies persist, and new ones emerge all the time. Folks on both sides of the pond may be in closer touch than ever before, but we are still, as George Bernard Shaw purportedly noted, “two nations divided by a common language.”

Blimey, I’m Knackered is the perfect companion for anyone desiring to bridge the gap between US and UK English or who simply enjoys the evolution of language and culture. American scholar and longtime UK resident Marshall Hall has organized his insightful definitions and explanations of British idioms, colloquialisms, abbreviations, acronyms, and slang into nineteen entertaining and revealing chapters covering everything from transportation and food to politics, education, and wardrobe. Making the book truly comprehensive are sections on pejoratives and “naughty bits.” Hall’s often amusing explanations make the book an engaging read for language lovers and travelers alike. Charming pen-and-ink illustrations by Mark Cowie add whimsy and humor to this entertaining, useful, and unique compendium. No American need ever be befuddled again!

Marshall Hall: Marshall Hall is a retired UK university professor who has held a lifelong interest in travel, exploration, linguistics, and adventure. As an American living in London he enjoys a multicultural perspective on career, family, and the human condition.