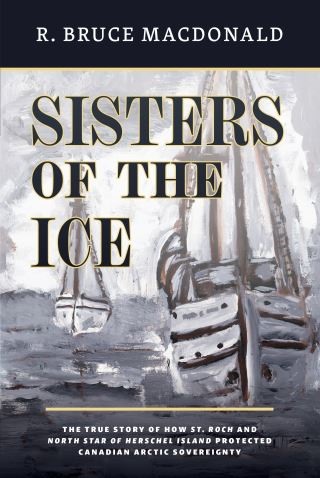 Sisters of the Ice

This book is a biography of two British Columbian ships that performed legendary service in the Canadian Arctic. The St. Roch, now on permanent display at the Vancouver Maritime Museum, is the better known of the two, although North Star of Herschel Island is still sailing and still adding to her legend. Historian Bruce Macdonald—who, along with his wife, owns North Star of Herschel Island—has meticulously researched the origins and service logs of each ship and created a book that will enthrall old Arctic hands, maritime history buffs and anyone who appreciates well-written Canadian history.

Under the command of Captain Henry Larsen, the sturdy RCMP vessel St. Roch spent years showing the Canadian flag in the Arctic, performing many duties including delivering medical supplies and taking census information in addition to enforcing the law in the North. St. Roch is world renowned for achieving many firsts, including being the first vessel through the Northwest Passage west to east, the first vessel to navigate the passage in both directions and the first vessel to circumnavigate North America. Inspired by St. Roch, renowned trapper and Inuit leader Fred Carpenter designed the elegant North Star, the ultimate ice vessel used to transport furs and people to and from remote Banks Island. Together, the two iconic ships have helped to solidify Canadian sovereignty in the Arctic and have become symbols of unity among Northern communities.

In Sisters of the Ice, Macdonald documents in vivid detail the adventurous histories of these two vessels, as well as the history of the Northern communities in which they gained renown. Detailing daring escapes from dangerous ice conditions to thrilling sea voyages to raucous whaling towns, Macdonald reveals the perilous and often lawless climate in which these vessels operated and the ties of Canadian identity that they helped forge.

R. Bruce Macdonald is a writer, sailor and artist with a passion for Canadian history. Macdonald has logged over 100,000 nautical miles and, for many years, has lived along the BC Coast aboard North Star with his wife and daughters. He is the author of North Star of Herschel Island (Friesen Press, 2012).