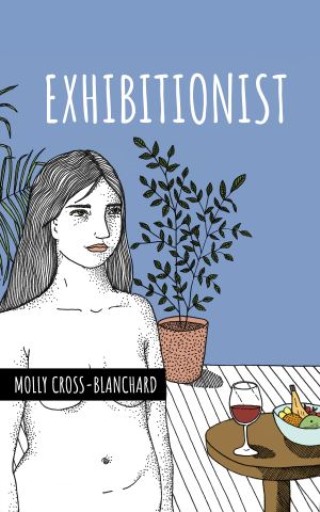 Smart, raunchy poems that are sorry-not-sorry.

“Sticky, sad, and sultry, Exhibitionist is a merry-go-round circling back to the tender, awkward parts of ourselves. Molly Cross-Blanchard allows her poems to ask the reader out for ice cream, to fart at a dinner party, to sprawl out on a chaise lounge, stare through a dusty skylight and whisper that they think they may love you. And that love will be unmistakably mutual.” —Mallory Tater, author of The Birth Yard and This Will Be Good

“Multiple orgasms appear in the first line of the first poem in Exhibitionist. Multiple orgasms, as a relative image or a practice, elicit everything from mystical worship to moral panic. Molly Cross-Blanchard understands this diametric power. She nods to this power with countless crisp and explicit images throughout her debut collection. Read her poems first to marvel at the well-crafted voicing of sexuality. Read a second time to appreciate Cross-Blanchard’s beautiful charge of juxtaposition. Again and again, she places the erotic beside mundane so that both are transformed — a dirty basement carpet becomes the backdrop of profound intimacy and gas station coffee acts as a symbol of self-discovery.” –Amber Dawn, author of My Art is Killing Me and Sodom Road Exit

One minute she’s drying her underwear on the corner of your mirror, the next she’s asking the sky to swallow her up: the narrator of Exhibitionist oscillates between a complete rejection of shame and the consuming heaviness of it. Painfully funny, brutally honest, and alarmingly perceptive, Molly Cross-Blanchard’s poems use humour and pop culture as vehicles for empathy and sorry-not-sorry confessionalism. What this speaker wants more than anything is to be seen, to tell you the worst things about herself in hopes that you’ll still like her by the end.

Molly Cross-Blanchard is a Métis writer and editor born on Treaty 3 territory (Fort Frances, ON), raised on Treaty 6 territory (Prince Albert, SK), and living on the unceded territory of the Musqueam, Squamish, and Tsleil-Waututh peoples (Vancouver, BC). She holds an English BA from the University of Winnipeg and a Creative Writing MFA from the University of British Columbia, and is the Publisher at Room Magazine.