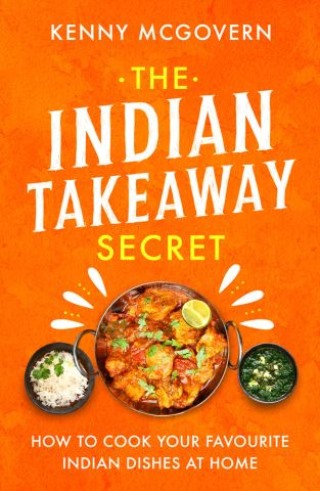 How to Cook Your Favourite Indian Dishes at Home

Kenny McGovern's obsession with recreating takeaway and fast food dishes over the years has led him to the belief that Indian cooking is perhaps the greatest example that variety really is the spice of life.

The different herbs and spices used in Indian dishes creates a vast range and depth of flavour, from spicy, sweet, savoury and sour curry sauces to fragrant and aromatic sides. The Indian Takeaway Secret is a meticulously researched love letter to Indian cooking, containing delicious examples of traditional Indian cooking and street-food style dishes alongside popular recipes honed and developed largely in the UK, as well as the fusion food offered in many Indian restaurants today.

Inside you will find restaurant classics like pakoras, bhajis, Dansak and Tikka Masala; classic dishes such as Sharabi and Tarka Dal; as well as street food favourites including Disco Fry Egg, Akoora and Aloo Subzi.

With this vast array of tasty takeaway recipes for every occasion, you'll be able to enjoy all your favourite Indian food from the comfort of your own home - and at half the price!

At the age of nineteen, KENNY McGOVERN was diagnosed with what is known as 'social anxiety disorder' and eventually became too ill to carry on working. As the years passed, he became almost housebound as a result of his illness and as such lost touch with many parts of life which although enjoyable are often taken for granted. Simple pleasures such as buying a nice sandwich from a local café or going out for a meal became impossible for him to do.

As a result of this, and because of his love of food and cooking, he eventually took to trying to recreate many of his favourite shop-bought foods at home. 'If I can't go to McDonalds, I'll make my own,' was his philosophy. Over a period of five years or more, he tested and tweaked many, many recipes, his new hobby quickly building into an obsession.

In 2010, Kenny decided to publish some selected recipes in his first book The Takeaway Secret - it became an instant bestseller, following word-of-mouth recommendations on the internet.

With huge support and encouragement from readers, his confidence has grown, along with his food obsession. As a result Kenny once more ventured out into the world. researching and learning about the historic links between street food and local people and the recent upsurge in the modern, exciting and vibrant street food culture. His next book, The Street Food Secret, followed in 2017.