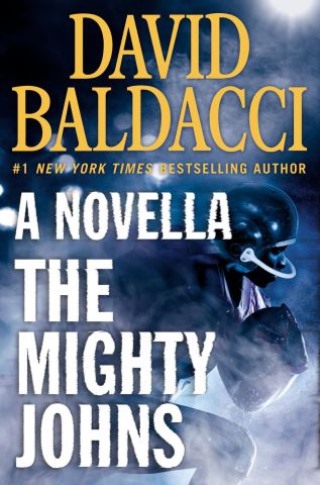 The Mighty Johns: A Novella

From a #1 New York Times bestselling author comes a gripping thriller novella about a college football player's investigation into the unsolved disappearance of a local legend who seemingly vanished into thin air.

Forty years ago, Herschel Ruggles, the most legendary player on the Mighty Johns football team at Draven University, disappeared after scoring a record-breaking touchdown.
​
Instead of tossing the ball to the referee after his near-mythical athletic feat or celebrating with the nearly 25,000 spectators in the stands, Ruggles continued running, ball in hand, into a passageway that led deep underneath the field to the Mighty Johns’ locker room—and was never seen again.

His disappearance has mystified the community for decades . . . until another player—Merlin North, a brilliant physics major—helps break Ruggles’s record for kickoff returns. After that, North turns detective and becomes fixated on discovering what happened to Herschel Ruggles.

Investigating Ruggles’s mysterious disappearance, however, will prove unexpectedly dangerous for North, as evidence of murder—and ghostly visions—reveal the truth to be far more stunning than he ever could have anticipated.

David Baldacci: David Baldacci is a global #1 bestselling author, and one of the world's favorite storytellers. His books are published in over forty-five languages and in more than eighty countries, with 150 million copies sold worldwide. His works have been adapted for both feature film and television. David Baldacci is also the cofounder, along with his wife, of the Wish You Well Foundation, a nonprofit organization dedicated to supporting literacy efforts across America. Still a resident of his native Virginia, he invites you to visit him at DavidBaldacci.com and his foundation at WishYouWellFoundation.org.