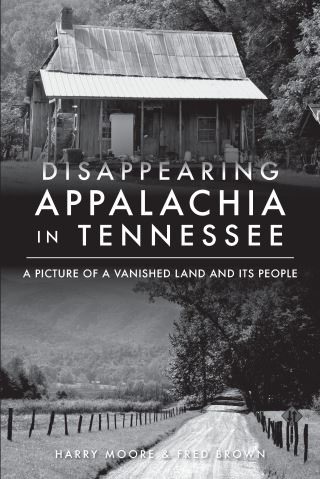 A Picture of a Vanished Land and Its People

Stepping through time to past and present communities, settled in deep hollows and surrounded by ridges and mountains in Tennessee's Appalachia, is to confront a different and disappearing realm. Travel along Hogskin and Richland Valleys. Visit Frenches Mill and Dulaney General Store while passing cantilever barns, one-room school buildings and steepled churches. Listen as octogenarians Robert, Charles, Glenn and others explain life without electricity. Former Cades Cove residents Lois and Inez tell stories of living in the Great Smoky Mountains National Park before it was a national park. Authors Fred Brown, retired journalist, and Harry Moore, retired geologist, explore Tennessee's Appalachian region, recalling its culture, land and people before it vanishes into the abyss of time.

Harry Moore: Harry Moore is a retired geologist from the Tennessee Department of Transportation (Knoxville) and, more recently, Golder Associates (Atlanta), where he worked a combined forty-seven years studying the geology of East Tennessee and surrounding regions. As an engineering geologist, he has been involved in the planning, design, construction and maintenance of East Tennessee's road system since 1972. His experience with landslides, rock falls, caves and sinkhole-related highway issues are known nationwide. He has penned numerous technical papers and made abundant presentations on not only highway engineering geology but also the region's geology. He has received the national Highway Geology Symposium Medallion Award for his contributions to the practice of highway engineering geology.|||Fred Brown was a working journalist for more than forty-five years. He reported on a wide variety of assignments that took him to endzones as a sportswriter, to editing a small-town daily in Arkansas, to war zones as an embedded reporter on general assignment and finally as a senior writer penning regional history and features. Brown is a member of the Scripps Howard Hall of Fame, recipient of the Tennessee Associated Press Managing Editors Malcolm Law Trophy for Feature Writing, received a National Endowment for the Humanities Fellowship in Journalism at the University of Michigan (1983-84) and was named to the East Tennessee Writers Hall of Fame for excellence in journalism in 2008.