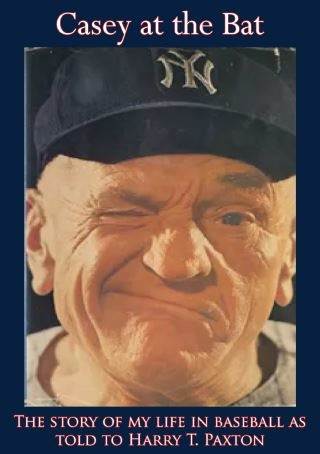 Casey at the Bat

The story of my life in baseball as told to Harry T. Paxton

Baseball's clown genius, Casey Stengel (1890-1975) was known as much for his hilarious double-talk as he was for managing the New York Yankees and Mets. Nicknamed “The Old Perfessor,” Stengel hid a fierce competitive drive behind his practical jokes and rambling monologues. His 14-year playing career was overshadowed by his 25-year career managing some of the best and worst teams in history.

When Yankees owner George Weiss picked Casey Stengel to take over as manager in 1948, reporters ridiculed his choice. During Stengel's playing days, he was known more for his antics than his baseball acumen. In nine years managing the Brooklyn Dodgers and Boston Braves, his teams had nine losing seasons. But Weiss's choice proved inspired. Stengel became the most popular and influential manager in baseball, a star in New York City and a national celebrity. Along the way, he won more World Series games than any manager in history.