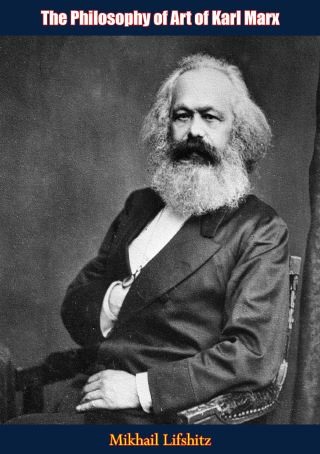 The Philosophy of Art of Karl Marx

The Philosophy of Art of Karl Marx, first published in 1933, is one of the major works of the Russian aesthetician and literary critic Mikhail Aleksandrovich Lifshitz. The author and editor of numerous books and articles in Marxist aesthetics, including ‘Marx and Engels on Art’ 1933, and ‘Lenin and Culture and Art’ 1938. Lifshitz has been since 1925 a teacher of philosophy and aesthetics in higher education institutes in Moscow. His writings have ranged from studies of contemporary bourgeois culture to the history of aesthetics and the relations between political commitment and artistic production. Since the war much of his work has concerned itself with modern Russian and European culture.

The Philosophy of Art of Karl Marx, is notable for its originality of method in approaching the subject of Marx’s aesthetics. Far from being a mere compendium of Marx’s comments on art and literature, it treats his writing in this field as an integral part of the totality of his thought. In his complex but lucid argument Lifshitz demonstrates the relations between Marx’s changing views of art and the development of his revolutionary theory – ranging from Marx’s own early Romantic poetry to ‘Capital’. In the process the book discusses some of Marx’s comment on art, in notebooks and articles, which are still little known.-Print ed.