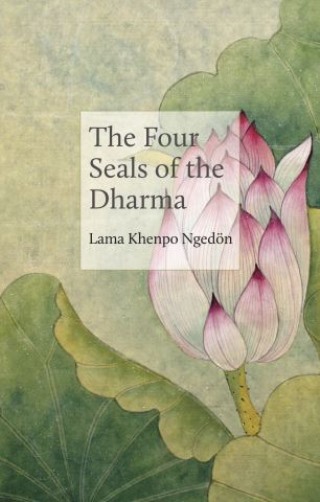 The Four Seals of the Dharma

Upon completing the path that led him to fully develop compassion and wisdom, Shakyamuni arrived at enlightenment, the state of Buddhahood that marks the end of suffering. Replying to the requests made of him, he transmitted three cycles of teachings to explain the path he had taken and the methods he used. Traditionally, Buddhism counts 84,000 teachings, and the four seals of the Dharma contain the essence of all these. Like a royal seal that historically proved authenticity and authority, the four seals give a true description of our current situation and that to which we can progress: All phenomena are impermanent by nature. All contaminated phenomena are suffering by nature. All phenomena are empty and devoid of inherent existence. Nirvana is a state of absolute peace. The first two seals allow us to understand the characteristics of our condition and the last two, the qualities of liberation. In this way, the teaching shows the Buddha’s path and the Buddhist perspective. Today, Buddhism is no longer an exotic movement but a methodology that has taken root and is practiced in the West. Nevertheless, do we really know what it means to be Buddhist? Using the introspective process of investigation that is precious to this tradition, Lama Khenpo Ngedön directly involves the reader in this discovery by asking simple, to-the-point questions and then bringing together the elements of an answer connected with these four statements.

Lama Khenpo Karma Ngedön: Lama Khenpo Ngedön is a scholar of Buddhist philosophy in the Tibetan tradition. He lives in Spain and teaches internationally.