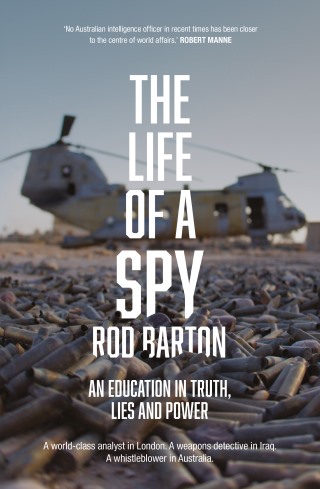 The Life of a Spy

An Education in Truth, Lies and Power

I was no James Bond with a licence to kill, but I worked with the British intelligence services and with, and for, the CIA. I had guns pointed at me, death threats issued, a price placed on my head.

In 1971, Rod Barton applied for a junior scientist role in the Australian Department of Defence. Little did he know what it entailed: as the Cold War intensified, Barton was inducted into the murky world of espionage.

For the next few decades, Barton lived a life straight from an adventure novel. In war-torn Mogadishu, he disarmed militia, while sleeping in rat-infested barracks. As a UN weapons inspector, he flew to Baghdad on special missions, interviewing top scientists to uncover an illegal weapons program, and raced across Europe, tracking materials sold to the Iraqis.

After the disastrous 2003 invasion of Iraq, the CIA engaged him as its special adviser in the hunt for Iraq’s weapons of mass destruction. But he soon clashed with the agency over what he saw – and what he didn’t find. It prompted him to step from the shadows and share the truth with the world, and to tussle with the Australian government.

This is an extraordinary behind-the-scenes account of a world marked by risk, secrecy and individual acts of courage. Written with passion, humour and candour, The Life of a Spy will introduce you to a man of principle in a time of chaos, and take you to the frontlines of politics and war.

‘No Australian intelligence officer in recent times has been closer to the centre of world affairs than Barton, or better placed to observe the intense political pressures applied, from all sides, on those searching for Saddam Hussein’s elusive weapons of mass destruction.’ —Robert Manne

Rod Barton: Rod Barton is a former Australian intelligence officer. Since the first Gulf War, his unique expertise has been sought by the CIA, the Australian government and the United Nations. His previous book is The Weapons Detective: The Inside Story of Australia’s Top Weapons Inspector.