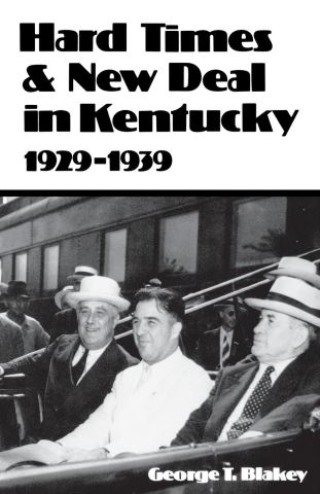 The Great Depression and the New Deal touched the lives of almost every Kentuckian during the 1930s. Fifty years later the Commonwealth is still affected by the legacies of that era and the policies of the Roosevelt administration. George T. Blakey has written the first full study of this turbulent decade in Kentucky, and he offers a fresh perspective on the New Deal programs by viewing them from the local and state level rather than from Washington.

Thousands of Kentuckians worked for New Deal programs such as the Civilian Conservation Corps and the Works Projects Administration; thousands more kept their homes through loans from the Home Owners Loan Corporation. Tobacco growers adopted new production techniques and rural farms received their first electricity because of the Agricultural Adjustment and Rural Electrification administrations.

The New Deal stretched from the Harlan County coal mines to a TVA dam near Paducah, and it encompassed subjects as small as Social Security pension checks and as large as revived Bourbon distilleries. The impact of these phenomena on Kentucky was both beneficial and disruptive, temporary and enduring.

Blakey analyzes the economic effects of this unprecedented and massive government spending to end the depression. He also discusses the political arena in which Governors Laffoon, Chandler, and Johnson had to wrestle with new federal rules. And he highlights social changes the New Deal brought to the Commonwealth: accelerated urbanization, enlightened land use, a lessening of state power and individualism, and a greater awareness of Kentucky history.

Hard Times and New Deal weaves together private memories of older Kentuckians and public statements of contemporary politicians; it includes legislative debates and newspaper accounts, government statistics and personal reminiscences. The result is a balanced and fresh look at the patchwork of emergency and reform activities which many people loved, many others hated, but no one could ignore.