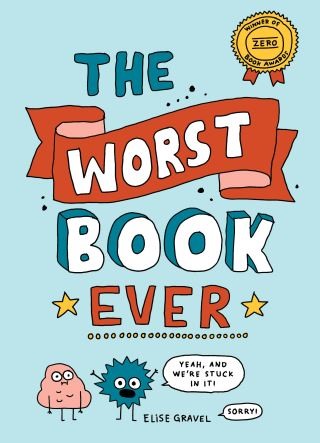 The Worst Book Ever

Elise Gravel wants to write a totally drab book; her characters want to let loos. Who's gonna win? Don’t take the title as a metaphor: it really is the worst book ever. Governor General Literary Award winning children’s book author and illustrator Elise Gravel takes readers on an unexpected journey through the world’s most boring book. The story’s characters and omniscient readers alike quickly become annoyed by the author’s bland imagination and rebel against her tired tropes and stale character choices, spouting sass in an attempt to get her attention and steer the narrative in a more interesting direction. After all, you don’t even have to buy the book, but the characters? They’re stuck in there for an eternity, and they’re going to do their best to make the most of it, or at least have a little fun where they can. As the charming and bizarre true nature of the characters overpowers the dry attributes given to them by the author, this once blasé story quickly picks up speed, transforming the story into something much more unique than originally promised. With Gravel’s signature goofy characters behind the wheel, no silly twist or rude body function is off the table!