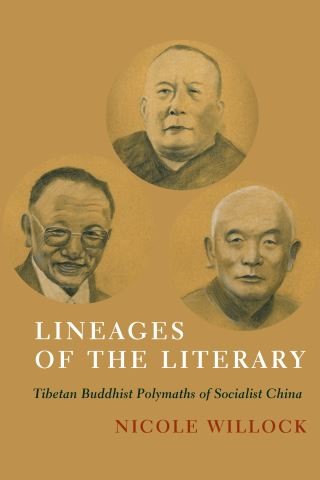 Lineages of the Literary

In the aftermath of the cataclysmic Maoist period, three Tibetan Buddhist scholars living and working in the People’s Republic of China became intellectual heroes. Renowned as the “Three Polymaths,” Tséten Zhabdrung (1910–1985), Mugé Samten (1914–1993), and Dungkar Lozang Trinlé (1927–1997) earned this symbolic title for their efforts to keep the lamp of the Dharma lit even in the darkest hour of Tibetan history.

Lineages of the Literary reveals how the Three Polymaths negotiated the political tides of the twentieth century, shedding new light on Sino-Tibetan relations and Buddhism during this turbulent era. Nicole Willock explores their contributions to reviving Tibetan Buddhism, expanding Tibetan literary arts, and pioneering Tibetan studies as an academic discipline. Her sophisticated reading of Tibetan-language sources vivifies the capacious literary world of the Three Polymaths, including autobiography, Buddhist philosophy, poetic theory, and historiography. Whereas prevailing state-centric accounts place Tibetan religious figures in China in one of two roles, collaborator or resistance fighter, Willock shows how the Three Polymaths offer an alternative model of agency. She illuminates how they by turns safeguarded, taught, and celebrated Tibetan Buddhist knowledge, practices, and institutions after their near destruction during the Cultural Revolution.

An interdisciplinary work spanning religious studies, history, literary studies, and social theory, Lineages of the Literary offers new insight into the categories of religion and the secular, the role of Tibetan Buddhist leaders in modern China, and the contested ground of Tibet.

Nicole Willock: Nicole Willock is associate professor of Asian religions in the Department of Philosophy and Religious Studies at Old Dominion University.