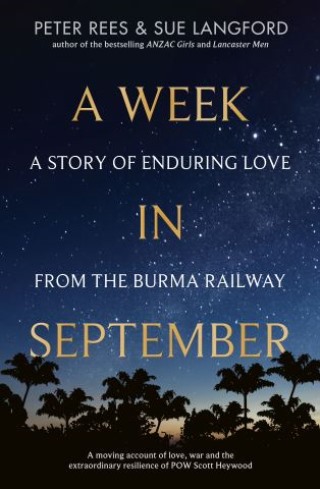 A Week in September

A story of enduring love from the Burma Railway

Through a precious cache of WWII letters, a story of war is revealed. But also, most movingly, a story of love, resilience and survival, from award-winning and bestselling writer, Peter Rees and Sue Langford..

'Profoundly moving ... I don't mind saying I wept at the end, for all the young men lost to war, their widows and children ... a lovely book.' The Australian

Doug Heywood was a teenager when he discovered, in a shoebox hidden in a wardrobe, hundreds of letters, all written by his father, Scott Heywood. As a POW on the infamous Burma Railway, Scott wrote almost daily to his young wife, Margery, on scraps of paper that had to be hidden from guards. These letters tell of an enduring love – and also, intriguingly, of how Scott dealt with the most brutally testing circumstances.

Scott's story has echoes of another story happening 7000 kilometres away at the same time. Viktor Frankl, a psychiatrist, was rounded up with his family and sent to Auschwitz in September 1942. Frankl later wrote in his classic book Man's Search for Meaning that the last of the human freedoms was the ability 'to choose one's attitude in any set of circumstances'. Scott Heywood and Viktor Frankl, on opposite sides of the world, found their own ways to survive that were uncannily similar.

This is the untold story of one man, one ordinary man, and his war. Woven through it is Margery's story, as she waited anxiously with their two young children in rural Victoria, trapped in an emotional rollercoaster, unaware that he was writing letters to her that could not be posted. This is a powerful and moving story of love, resilience and survival.

Peter Rees has had a long career as a journalist covering federal politics and as an author specialising in Australian military history. His books include Anzac Girls; Desert Boys; Lancaster Men; Bearing Witness: The Remarkable Life of Charles Bean; and The Missing Man: From the Outback to Tarakan, the Powerful Story of Len Waters, Australia's First Aboriginal Fighter Pilot. Killing Juanita, about the still unsolved disappearance of heiress, newspaper publisher and anti-development campaigner, won the 2004 Ned Kelly Award for True crime.