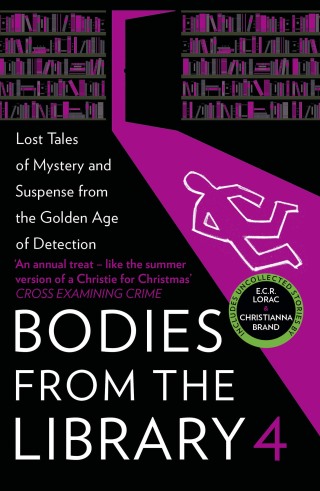 Bodies from the Library 4

This annual anthology of rare stories of crime and suspense brings together tales from the Golden Age of Detective Fiction for the first time in book form, including a short novel by Christianna Brand.

Mystery stories have been around for centuries—there are whodunits, whydunits and howdunits, including locked-room puzzles, detective stories without detectives, and crimes with a limited choice of suspects.

Countless volumes of such stories have been published, but some are still impossible to find: stories that appeared in a newspaper, magazine or an anthology that has long been out of print; ephemeral works such as plays not aired, staged or screened for decades; and unpublished stories that were absorbed into an author’s archive when they died . . .

Together with a newly unearthed short story by Ethel Lina White that inspired Hitchcock’s The Lady Vanishes, and a complete short novel by Christianna Brand, this diverse mix of tales by some of the world’s most popular classic crime writers contains something for everyone.

Complete with indispensable biographies by Tony Medawar of all the featured authors, the fourth volume in the series Bodies from the Library once again brings into the daylight the forgotten, the lost and the unknown.

Dame Ngaio Marsh was born in New Zealand in 1895 and died in February 1982. She wrote over 30 detective novels and many of her stories have theatrical settings, for Ngaio Marsh’s real passion was the theatre. She was both an actress and producer and almost single-handedly revived the New Zealand public’s interest in the theatre. It was for this work that the received what she called her ‘damery’ in 1966.

Editor Tony Medawar is a detective fiction expert and researcher with a penchant for tracking down rare stories. In addition to the Bodies from the Library series, he has edited anthologies including While the Light Lasts (Agatha Christie), The Avenging Chance (Anthony Berkeley), The Spotted Cat (Christianna Brand), A Spot of Folly (Ruth Rendell) The 9.50 Up Express (Freeman Wills Crofts), and the book Murder, She Said: The Quotable Miss Marple.

Robert Bruce Montgomery was born in Buckinghamshire in 1921, and was a golden age crime writer as well as a successful concert pianist and composer. Under the pseudonym Edmund Crispin, he wrote 9 detective novels and 42 short stories. In addition to his reputation as a leader in the field of mystery genre, he contributed to many periodicals and newspapers and edited sci–fi anthologies. After the golden years of the 1950s he retired from the limelight to Devonshire until his death in 1978.