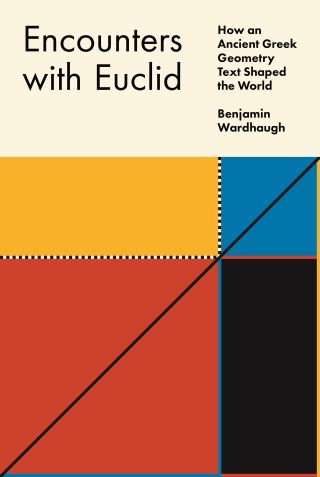 How an Ancient Greek Geometry Text Shaped the World

Euclid's Elements of Geometry is one of the fountainheads of mathematics—and of culture. Written around 300 BCE, it has traveled widely across the centuries, generating countless new ideas and inspiring such figures as Isaac Newton, Bertrand Russell, Abraham Lincoln, and Albert Einstein. Encounters with Euclid tells the story of this incomparable mathematical masterpiece, taking readers from its origins in the ancient world to its continuing influence today.

In this lively and informative book, Benjamin Wardhaugh explains how Euclid’s text journeyed from antiquity to the Renaissance, introducing some of the many readers, copyists, and editors who left their mark on the Elements before handing it on. He shows how some read the book as a work of philosophy, while others viewed it as a practical guide to life. He examines the many different contexts in which Euclid's book and his geometry were put to use, from the Neoplatonic school at Athens and the artisans' studios of medieval Baghdad to the Jesuit mission in China and the workshops of Restoration London. Wardhaugh shows how the Elements inspired ideas in theology, art, and music, and how the book has acquired new relevance to the strange geometries of dark matter and curved space.

Encounters with Euclid traces the life and afterlives of one of the most remarkable works of mathematics ever written, revealing its lasting role in the timeless search for order and reason in an unruly world.

Benjamin Wardhaugh: Benjamin Wardhaugh is a historian of mathematics. He is the author of Gunpowder and Geometry: The Life of Charles Hutton, Pit Boy, Mathematician, and Scientific Rebel and How to Read Historical Mathematics (Princeton) and the editor of A Wealth of Numbers: An Anthology of 500 Years of Popular Mathematics Writing (Princeton). He lives in Oxford, England.