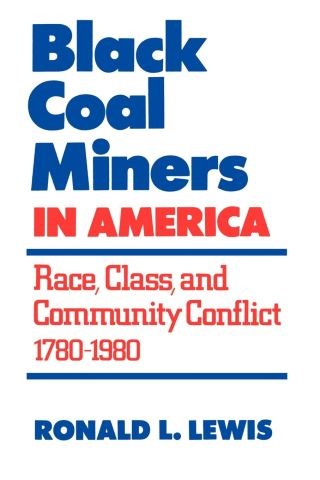 From the early day of mining in colonial Virginia and Maryland up to the time of World War II, blacks were an important part of the labor force in the coal industry. Yet in this, as in other enterprises, their role has heretofore been largely ignored. Now Roland L. Lewis redresses the balance in this comprehensive history of black coal miners in America.

The experience of blacks in the industry has varied widely over time and by region, and the approach of this study is therefore more comparative than chronological. Its aim is to define the patterns of race relations that prevailed among the miners.

Using this approach, Lewis finds five distractive systems of race relations. There was in the South before and after the Civil War a system of slavery and convict labor—an enforced servitude without legal compensation. This was succeeded by an exploitative system whereby the southern coal operators, using race as an excuse, paid lower wages to blacks and thus succeeded in depressing the entire wage scale. By contrast, in northern and midwestern mines, the pattern was to exclude blacks from the industry so that whites could control their jobs and their communities. In the central Appalachians, although blacks enjoyed greater social equality, the mine operators manipulated racial tensions to keep the work force divided and therefore weak. Finally, with the advent of mechanization, black laborers were displaced from the mines to such an extent that their presence in the coal fields in now nearly a thing of the past.

By analyzing the ways race, class, and community shaped social relations in the coal fields, Black Coal Miners in America makes a major contribution to the understanding of regional, labor, social, and African-American history.

Ronald L. Lewis: Ronald L. Lewis, professor of history and associate in the Regional Research Institute at West Virginia University, is the author of Coal, Iron, and Slaves: Industrial Slavery in Maryland and Virginia, 1715–1865.