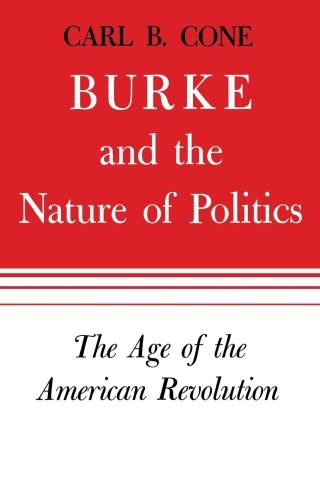 Burke and the Nature of Politics

The Age of the American Revolution

Edmund Burke in recent years has assumed extraordinary stature in American political thinking as the father of neoconservatism. In this book, the first of a two-volume biography of this eighteenth-century English statesman, Mr. Cone brings important new evidence to his thesis that during the age of the American Revolution Burke was significant more as the politician and the party man than as a systematic political philosopher.

This volume deals with Burke's career to 1782, when the Marquis of Rockingham, to whom Burke had attached himself seventeen years earlier, stood once again on the threshold of the prime ministership. In this period Burke was the voice—and frequently the behind-the-scenes leader—of the parliamentary opposition to George III, Lord North, and the "King's Friends." Ever since the repeal of the Stamp Act in 1766, he and his colleagues had struggled against the government over the great imperial questions of America, India, and Ireland and over the "influence" of the crown in domestic affairs through the patronage of the royal household offices.

Mr. Cone stresses the importance of Burke's practical contributions to the art of government. By his partisan activities, his leadership in parliament, and his political writings, Burke gave expression to new ideas about the nature of English politics and emphasized the value of political parties as necessary instruments of free government. Indeed, Mr. Cone states, in so far as Burke the conservative championed the cause of party government, he did more than the political radical to change the nature of the cabinet, of parliament, of their relationship to one another, of the monarchy and its relationship to the cabinet and parliament—in short, to revolutionize the practical working of the political and constitutional system of England.

Based upon manuscript sources which were not opened to general scholarship until 1949, this book contains much new information about Burke's private life and provides a provocative reevaluation of his political career in the age of the American Revolution.

Carl B. Cone: Carl B. Cone is professor of history emeritus in the University of Kentucky.