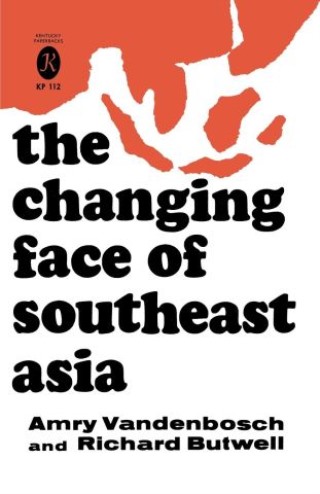 The Changing Face of Southeast Asia

Southeast Asia, whose alienation might tilt the balance of power in favor of the Communist bloc, has become the focus of American foreign policy. Amry Vandenbosch and Richard Butwell here trace the development of the eight nations which comprise Southeast Asia and appraise their current role in international affairs.

Although led to adopt state forms similar to those of the departing colonial powers, each nation traditionally had quite different political systems. It is the authors' thesis that their historical patterns of political and social behavior are re-emerging and that the chief differences among the national political systems and related ways of life can largely be explained in these terms. They feel that the main changes in Southeast Asia in the past two decades reflect the peculiar wedding of such historical considerations and the worldwide forces of democracy, communism, and economic development.

Southeast Asia, the authors hold, can be viewed as a single collective political entity, for no country is free from direct or indirect influence from its neighbors and this interaction is increasing in quantity and intensity. The pattern of political development, the authors assert, is much colored by national variations of common occurrences, but paradoxically Southeast Asia has never meant more in terms of an interdependent unit historically than it does today.