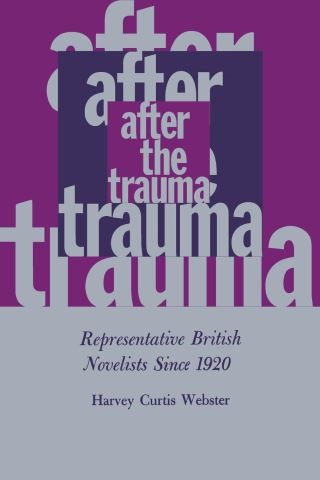 In this lucid book a distinguished scholar and critic measures British fiction from World War I through the convulsive effects of the Depression and World War II, and the importance of the writing that has been done since Finnegan's Wake.

Webster presents a moving account of the shattering impact of the Great War upon British writers, particularly Rose Macaulay, Aldous Huxley, Evelyn Waugh, and Ivy Compton-Burnett. The cynicism and despair which afflicted them also bore heavily on the novelists of the thirties and forties—Graham Greene, Joyce Cary, L. P. Hartley, C. P. Snow, who endured the disorder and violence of the Depression and World War II. Though all of these writers spoke with individual voices ranging from pessimism to joyful affirmation, they were all marked ineradicably by the turmoil of the period. The book closes with an overview of the writers who have developed since World War II.

Penetrating, fresh, affirmative in its values, the book is an important assessment of this protean group of writers.