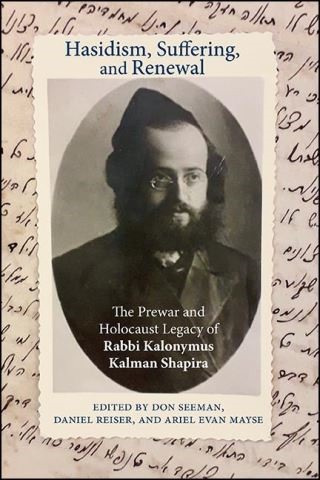 The Prewar and Holocaust Legacy of Rabbi Kalonymus Kalman Shapira

Kalonymus Kalman Shapira (1889–1943) was a remarkable Hasidic mystic, leader, and educator. He confronted the secularization and dislocation of Polish Jews after World War I, the failure of the traditional educational system, and the devastation of the Holocaust, in which he lost all his close family and eventually his own life. Thanks to a new critical edition of his Warsaw Ghetto sermons, scholars have begun to reassess the relationship between Shapira's literary and educational attainments, his prewar mysticism, and his Holocaust experience, and to reexamine the question of faith—or its collapse—in the Warsaw Ghetto. This interdisciplinary volume, the first such work devoted to a twentieth-century Hasidic leader, integrates social and intellectual history along with theological, literary, and anthropological analyses of Shapira's legacy. It raises theoretical and methodological questions related to the study of Jewish thought and mysticism, but also contributes to contemporary conversations about topics such as spiritual renewal and radical religious experience, the literature of suffering, and perhaps most pressingly, the question of faith and meaning—or their rupture—in the wake of genocide.