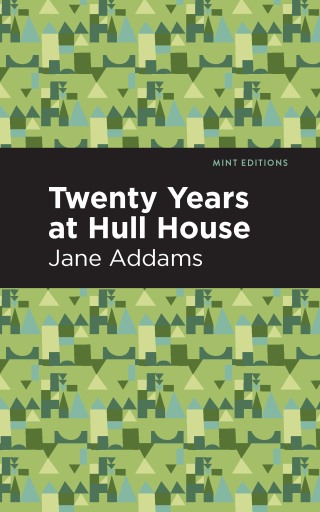 Jane Addams, the co-founder of Hull House, the famous settlement home, writes about her experiences and insights in her autobiography, Twenty Years at Hull House. As a child growing up in Illinois, Addams suffered from Pott’s Disease, which was a rare infection in her spine. This disease caused her to contract many other illnesses, then because of these aliments, Addams was self-conscious of her appearance. She explains that she could not play with other children often due to a limp, a side effect to her illnesses. Still, she is able to provide relatable and even amusing childhood anecdotes. Addams was very close to her father. She admired him for his political work, which likely inspired her own interest and attention to the social problems of her society. In a time invested with xenophobia and cruelty towards immigrants, Addams bought land in Chicago and co-founded a settlement house named Hull House. There, Addams sought to improve the lives of immigrants and the poor by providing shelter, essential social services, and access to education. Addams served as an advocate not only for the impoverished and immigrants, but also for women. She was a leader within the women’s suffrage movement, determined to expand the work she did for her community to a national scale.

Twenty Years at Hull House provides both a conversation about social issues and an example of how to act against them. Though originally published in 1910, Addams autobiography provides social discourse that is not only still relevant, but also considered radical by some. Addams’ autobiography was well received when it was first released, impacting many key reform movements. Twenty Years at Hull House still carries that effect today, inspiring its readers to improve their community and advocate for those in need.

This edition of Twenty Years at Hull House by Jane Addams features a new, eye-catching cover design and is printed in a readable font, ready to inspire readers to follow the footsteps and musings of activist Jane Addams.

Jane Addams (1860-1935) was an American activist, social worker, sociologist, feminist, and author born in Illinois. Addams was very active in her community as a leader in the women’s suffrage movement, and an advocate for the poor and immigrants. She co-founded the Hull House, a settlement home, which hosted educational courses for children as well as adults, medical facilities, and an art gallery amongst its many programs and efforts to better the Chicago community. Addams also founded the American Civil Liberties Union (ACLU) to provide legal assistance and protect civil rights. In 1931, Addams became the first American woman to win the Nobel Peace Prize.