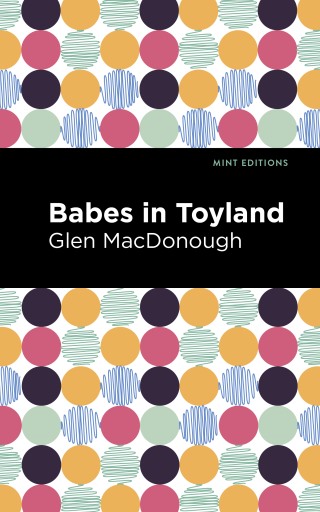 Babes in Toyland (1903) is a libretto by Glen MacDonough. Written for an operetta composed by Victor Herbert, MacDonough’s libretto is a story for children and adults alike. Taking inspiration from beloved Mother Goose nursery rhymes, MacDonough crafted an American classic that has been adapted countless times for theater, film, and television.

As though losing their parents wasn’t traumatic enough, Alan and Jane are forced to live with their wicked Uncle Barnaby. When he becomes aware of the massive fortune they stand to inherit, he hatches a plan to get them out of the way. Sent to sea with sailors Gonzorgo and Roderigo, Alan and Jane are soon lost in a terrible shipwreck. Somehow, they survive and are taken to the garden of Contrary Mary—who had nearly been forced to marry Barnaby. When their Uncle discovers their location, Alan and Jane are kidnapped and taken to the Forest of No Return, where a benevolent queen offers to protect them from the treacherous Spider’s Den. Eventually, the children make their way to Toyland, where they must make a final stand against Barnaby and the Master Toymaker. Babes in Toyland is a tale of romance and adventure from Glen MacDonough, a legendary figure of early Broadway.

With a beautifully designed cover and professionally typeset manuscript, this edition of Glen MacDonough’s Babes in Toyland is a classic of American children’s fiction reimagined for modern readers.

Glen MacDonough (1870-1924) was an American journalist, lyricist, and librettist. Born in Brooklyn, MacDonough was raised in a theatrical family—his father, Thomas B. MacDonough, was a theater manager, while his mother, Laura Don, was an actress and playwright. MacDonough got his start as a features reporter in New York City before finding moderate success with his comedy The Prodigal Father (1892). He gained a reputation as a lyricist for his work on the operetta Chris and the Wonderful Lamp (1899), which included music by famed composer John Philip Sousa. After working on the first musical production of The Wizard of Oz (1902), he found his break as the librettist for Victor Herbert’s beloved operetta Babes in Toyland (1903). He continued to work as a writer throughout his life and in 1914 became a founding member of ASCAP, the American Society of Composers, Authors and Publishers.