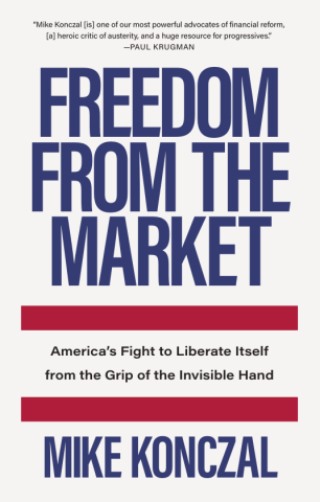 Freedom From the Market

First book by economist with national reputation: Author is widely respected economics commentator, admired as a popularizer of complicated ideas.

Major media platform: Author has places hundreds of articles, in publications ranging from The Atlantic and The New Republic to Jacobin and Salon; he has also appeared extensively on national media. Twitter feed, @rortybomb, has 37K followers.

A-List progressive blurbs: We will have full slate from among the author’s admirers, including Ezra Klein and Robert Reich

Serial and op-ed placements: Author is preparing series of excerpts for serial placement, as well as range of op-eds in national media, including Salon, Vox, WSJ, The Nation, Dissent, The Atlantic, and elsewhere.

Mike Konczal is a director at the Roosevelt Institute, where he focuses on economics, inequality, and the role of public power in a democracy. He is a co-author, with Joseph Stiglitz, of Rewriting the Rules of the American Economy. Described as having ”a cult following among progressives“ by the New York Times Magazine, his writing has been featured in the Washington Post, Vox, Dissent, and The Nation. He is a sought-after commentator on the U.S. economy and has appeared on CNN, MSNBC, All Things Considered, Planet Money, and Lovett or Leave It. Born and raised in Chicago, he now lives in Takoma Park, Maryland, with his wife, daughter, and pit bull.