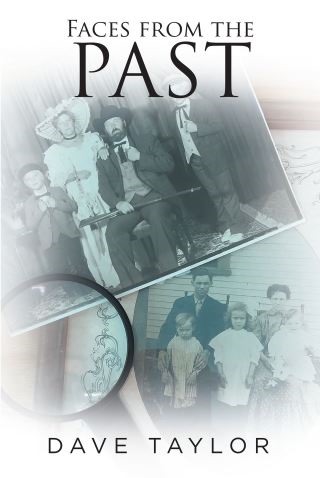 Faces from the Past

It's been four years since Dave Harlow's wife, Helen, passed away. Since then, he has renewed his passion for researching his family roots. He uses his magnifying glass to stare into each and every one of the hundreds of family pictures-the old housing, clothes, and hairstyles. From horse-drawn carriages to old cars, this was a time gone by.

He is now focused on the picture of a family of nine. His great-great-great-grandfather and grandmother, along with their children, standing and sitting on the lawn in front of a big house having a group picture taken. The closer he looks at the picture, the more he studies each detail, the more he can feel himself being pulled into the picture, becoming part of the scene.

He now finds himself standing behind the photographer taking a picture of the family he was just looking at through the magnifying glass. He moves around to the front of the camera and is now gazing at the family he only a second ago had seen in a picture he was holding. This dream reality will only last a day as he wakes up at his desk, staring at the picture of the family of eight. Was it a dream, or did it really happen?

He seeks medical and mental help only to find all is well. Could he have just dreamed it?

Dave returns home to again start looking through multiple pictures. Could it happen again, and where will he go next?

Join Dave as he sees his father purchase his first new 1928 automobile and watches Mathew Brady take a photograph of Abe Lincoln and General McClellan. Finally, Dave will explore New York at the turn of the early nineteen hundreds.

Are any of these events actually happening, or are they a dream?