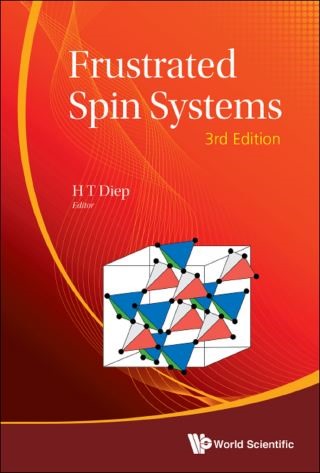 Frustrated spin systems have been first investigated five decades ago. Well-known examples include the Ising model on the antiferromagnetic triangular lattice studied by G H Wannier in 1950 and the Heisenberg helical structure discovered independently by A Yoshimori, J Villainn and T A Kaplan in 1959. However, extensive investigations on frustrated spin systems have really started with the concept of frustration introduced at the same time by G Toulouse and by J Villain in 1977 in the context of spin glasses. The frustration is generated by the competition of different kinds of interaction and/or by the lattice geometry. As a result, in the ground state all bonds are not fully satisfied. In frustrated Ising spin systems, a number of spins behave as free spins. In frustrated vector spin systems, the ground-state configuration is usually non-collinear. The ground state of frustrated spin systems is therefore highly degenerate and new induced symmetries give rise to unexpected behaviors at finite temperatures. Many properties of frustrated systems are still not well understood at present. Theoretically, recent studies shown in this book reveal that established theories, numerical simulations as well as experimental techniques have encountered many difficulties in dealing with frustrated systems. In some sense, frustrated systems provide an excellent testing ground for approximations and theories. Experimentally, more and more frustrated materials are discovered with interesting properties for applications.