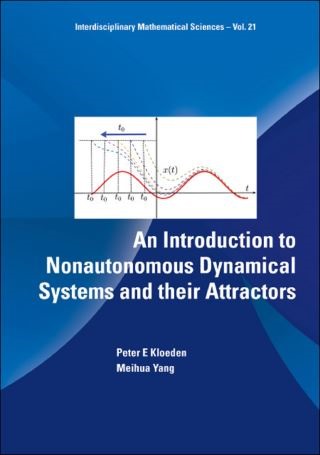 Introduction To Nonautonomous Dynamical Systems And Their Attractors, An

The nature of time in a nonautonomous dynamical system is very different from that in autonomous systems, which depend only on the time that has elapsed since starting rather than on the actual time itself. Consequently, limiting objects may not exist in actual time as in autonomous systems. New concepts of attractors in nonautonomous dynamical system are thus required.In addition, the definition of a dynamical system itself needs to be generalised to the nonautonomous context. Here two possibilities are considered: two-parameter semigroups or processes and the skew product flows. Their attractors are defined in terms of families of sets that are mapped onto each other under the dynamics rather than a single set as in autonomous systems. Two types of attraction are now possible: pullback attraction, which depends on the behaviour from the system in the distant past, and forward attraction, which depends on the behaviour of the system in the distant future. These are generally independent of each other.The component subsets of pullback and forward attractors exist in actual time. The asymptotic behaviour in the future limit is characterised by omega-limit sets, in terms of which form what are called forward attracting sets. They are generally not invariant in the conventional sense, but are asymptotically invariant in general and, if the future dynamics is appropriately uniform, also asymptotically negatively invariant.Much of this book is based on lectures given by the authors in Frankfurt and Wuhan. It was written mainly when the first author held a 'Thousand Expert' Professorship at the Huazhong University of Science and Technology in Wuhan.