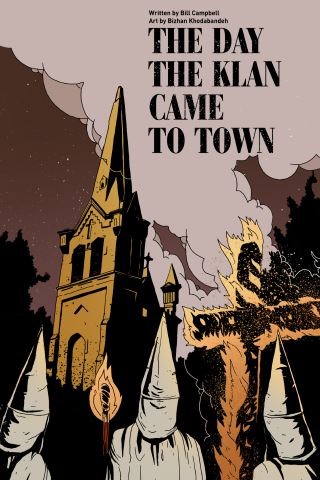 The Day the Klan Came to Town

The year is 1923. The Ku Klux Klan is at the height of its power in the US as membership swells into the millions and they expand beyond their original southern borders. As they grow, so do their targets. As they continue their campaigns of terror against African Americans, their list now includes Catholics and Jews, southern and eastern Europeans, all in the name of “white supremacy.” But they are no longer considered a terrorist organization. By adding the messages of moral decency, family values, and temperance, the Klan has slapped on a thin veneer of respectability and has become a “civic organization,” attracting ordinary citizens, law enforcement, and politicians to their particular brand of white, Anglo-Saxon, and Protestant “Americanism.”

Pennsylvania enthusiastically joined that wave. That was when the Grand Dragon of Pennsylvania decided to display the Klan’s newfound power in a show of force. He chose a small town outside of Pittsburgh named after Andrew Carnegie; a small, unassuming borough full of “Catholics and Jews,” the perfect place to teach these immigrants “a lesson.” Some thirty thousand members of the Klan gathered from as far as Kentucky for “Karnegie Day.” After initiating new members, they armed themselves with torches and guns to descend upon the town to show them exactly what Americanism was all about.

The Day the Klan Came to Town is a fictionalized retelling of the riot, focusing on a Sicilian immigrant, Primo Salerno. He is not a leader; he’s a man with a troubled past. He was pulled from the sulfur mines of Sicily as a teen to fight in the First World War. Afterward, he became the focus of a local fascist and was forced to emigrate to the United States. He doesn’t want to fight but feels that he may have no choice. The entire town needs him—and indeed everybody—to make a stand.

Bill Campbell is the author of Sunshine Patriots; My Booty Novel; Pop Culture: Politics, Puns, “Poohbutt” from a Liberal Stay-at-Home Dad; Koontown Killing Kaper; and Baaaad Muthaz. Along with Edward Austin Hall, he coedited the groundbreaking anthology, Mothership: Tales from Afrofuturism and Beyond. He has also coedited Stories for Chip: A Tribute to Samuel R. Delany; APB: Artists against Police Brutality (for which he won a Glyph Pioneer/Lifetime Achievement Award); and Future Fiction: New Dimensions of International Fantasy and Science Fiction. His latest anthology is a two-volume collection with over one hundred science fiction, fantasy, and horror stories from around the world, Sunspot Jungle: The Ever Expanding Universe of Fantasy and Science Fiction. Campbell lives in Washington, DC, where he spends his time with his family and helms Rosarium Publishing.