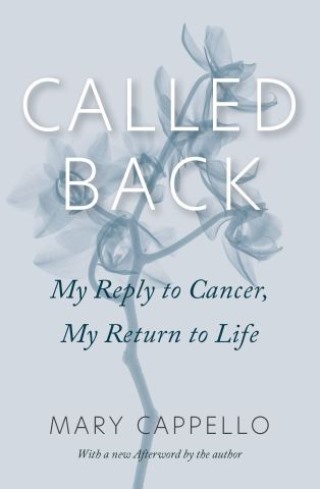 My Reply to Cancer, My Return to Life

Foreword Book of the Year Award
Independent Publishers Award (IPPY)
Lambda Literary Award Finalist
Publishing Triangle Award Finalist
GAMMA Award, Best Feature from The Magazine Association of the Southwest for “Getting the News,” The Georgia Review, Summer 2009
Notable Essay of the Year Citation in Best American Essays 2010 for “Getting the News”
Named one of the Best Books of the Year by the Guerilla Girls On Tour and by WILLA: Women in Literary Arts and Letters

An extended meditation on the nature of love and the nature of time inside illness, Called Back is both a narrative and non-narrative experiment in prose. The book moves through the standard breast cancer treatment trajectory (diagnosis, surgery, chemotherapy, radiation), with the aim of discovering unexpected vectors of observation, meaning and desire inside each phase of the typically mandated four-part ritual. A lyrical feminist critique of living with cancer at the turn of the twenty-first century in the United States, the book looks through the lens of cancer to discover new truths about intimacy and essential solitude, eroticism, the fact of the body, and the impossibility of turning away. Offering original exegeses of the work of Marsden Hartley, Emily Dickinson, Gertrude Stein, and Marcel Proust, Called Back relies on these artists’ queer aesthetics to tease the author back to life. What might a person tutored as a reader of signs “see” inside breast cancer’s paces, protocols, and regimes? What does the experience occlude, and what can we afford to liberate?

The first chapter paves the way for the book’s central emphases: a meditation on the nature of “news” and the new, on noticing, on messages—including those that the body itself relies upon in the assumption of disease—and the interpretive methods we bring to them in medical crisis. Language is paramount for how we understand and act on the disease, how we imagine it, how we experience it, and how we treat it, Cappello argues.

Mary Cappello: Mary Cappello’s seven books of literary nonfiction include a Los Angeles Times bestselling detour on awkwardness, a lyric biography, and the mood fantasia Life Breaks In. Her most recent book, Lecture, a speculative manifesto, inaugurates Transit Books’ Undelivered Lecture Series. A former Guggenheim and Berlin Prize Fellow, she is a professor of English and creative writing at the University of Rhode Island.