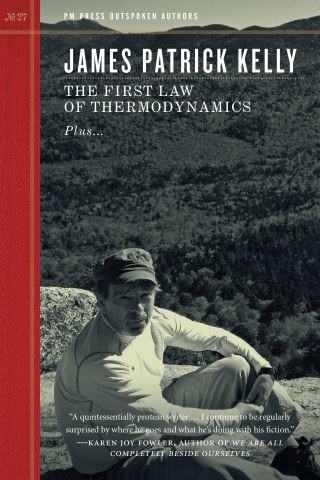 The First Law of Thermodynamics

James Patrick Kelly is known for finding the future unnervingly nearby, and he enters with his deep empathy and dry humor at the ready. A longtime favorite of SF readers is at the top of his game here. In the title story, a college acid trip becomes a window into an unexpected and apparently unavoidable future. In “Itsy Bitsy Spider” a disappointed woman’s robotic girlhood takes her by the hand and leads her back to the destiny that eluded her. Two short plays render alien invasion terrifyingly mundane and death annoyingly impermanent. “The Best Christmas Ever” is celebrated by sims and droids instead of the usual jolly elves. Our Outspoken Interview and a bibliography round out this long-awaited new collection.

James Patrick Kelly’s short stories are regular favorites in the science fiction magazines and awards lists. His fiction has been translated into twenty-one languages. He writes a regular column in Asimov’s Science Fiction Magazine. He was a member of the faculty at the Stonecoast Creative Writing MFA Program from 2005–2018. Appointed by the governor to the New Hampshire State Council on the Arts, he served for eight years, the last two as Chair. After graduating magna cum laude in literature from Notre Dame, James Patrick Kelly burst onto the SF field like a runaway rocket with stories that energized a new generation of readers and introduced him to the top rank of SF pros. He has remained there ever since, adding plays, anthologies, and audio books to array of talents. His work as a teacher and mentor in an MFA program and his audio performances have increased his solid fan base.