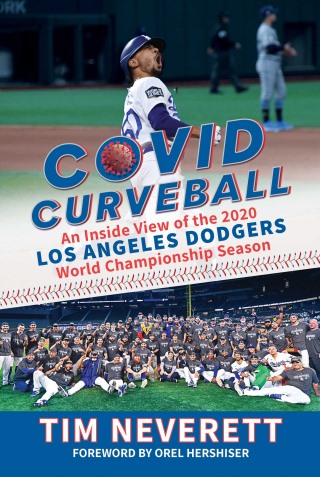 A riveting inside account of the most unforgettable season in Los Angeles Dodgers history, from the COVID-delayed start through the incredible playoff run, by the broadcaster who saw it all.

As America’s Pastime reeled from a global pandemic, the LA Dodgers rallied to win arguably the most difficult baseball season ever played. Amid strict new rules and Coronavirus outbreaks on other teams that wreaked havoc on the schedule, the Dodgers maintained a laser focus as a team and organization, and ultimately, won the first bubbled playoffs in the history of Major League Baseball.

In COVID Curveball, author and Dodgers’ broadcaster Tim Neverett takes us through this unprecedented season, offering exclusive access and firsthand, edge-of-your-seat, play-by-play coverage of the surreal days and weeks that led up to the dramatic championship climax. It’s a highly entertaining, often humorous chronicle of the quirky nature of the season, the goings-on behind the scenes at the stadium and MLB at large, as well as the unique chemistry forged in the diverse and dynamic clubhouse.  Along with insights into the potent lineup that produced jaw-dropping moments by Mookie Betts, Corey Seager, Justin Turner, Max Muncy, and Cody Bellinger, the book also celebrates the incredible achievements of Clayton Kershaw that cemented his Hall-of-Fame legacy, and the remarkable job done by Dave Roberts and the Dodgers’ executives and ownership.

Highlighted by empty stands, remote broadcasts, and relentless testing, 2020 was perhaps the strangest baseball season ever…but it produced the most savored World Series celebration in the history of the game.

Tim Neverett: Tim Neverett is a veteran of over thirty years in the field of sportscasting, having started his career as a play-by-play announcer at age nineteen with the Nashua Pirates (AA). He made it to the majors, first calling games for the Pittsburgh Pirates and then the Boston Red Sox, before moving to LA to call the Dodgers on television and radio. Tim has called major college football, basketball, and hockey on national TV and has been a local and national radio sports talk show host. He also called various events at four Olympic Games, including baseball, softball, soccer, basketball, skiing, and hockey.