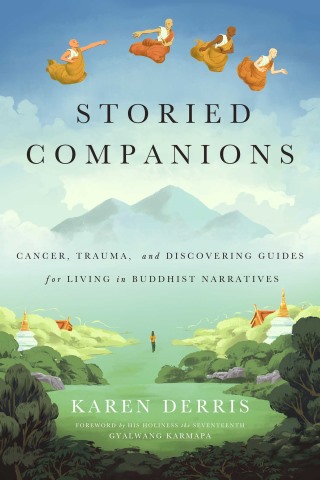 “With my diagnosis of grade IV brain cancer, I no longer observe the truth of impermanence from a critical, analytical distance. I am crashing into it, or it into me.”

By reading ancient Buddhist stories with new questions and a new purpose—finding a way to live with her dying body—she discovers new ways to make them immediate and real. For instance, reading with her terminal prognosis, she becomes one of the four omens (the four signs of impermanence and suffering) the young Siddhartha sees in his excursions from the palace. What would it mean for her to be in the crowd, straining to see the prince with her own sick and impermanent body—to be pushed aside and out of sight by the palace minders, just as our society so often tries to brush aside anything uncomfortable, but to nonetheless be seen by the young bodhisattva? Or reading as a mother, maybe she shares something akin to what Queen Maya may have felt, knowing she was dying, giving her newborn son over to her sister’s care? What will it mean for her own children to be motherless? She follows the knotted threads connecting Milarepa’s angry, vengeful mother to Karen’s own mother, who physically abused her throughout a traumatic childhood. By placing herself into these stories, she turns them from distant and static narratives into companions, and from companions into guides.

Storied Companions interweaves Karen’s memoir of her life of trauma and illness with stories from Buddhist literary traditions, sharing with the reader how she found ways to live with the reality that she won’t live as long as she wants and needs to. Honest, powerful, and insightful, Storied Companions itself becomes an invaluable companion, guiding the reader to discover new ways of facing and experiencing life, death, and impermanence.

Karen Derris: Dr. Karen Derris is a scholar of South and Southeast Asian Buddhist traditions and professor of religious studies at the University of Redlands. Her research focuses on the intersection of literature and feminist ethics in pre-modern Buddhist traditions, particularly focusing upon the central importance of community in Buddhist ethical and spiritual development. Dr. Derris received her PhD from the Committee on the Study of Religion at Harvard University in 2000.