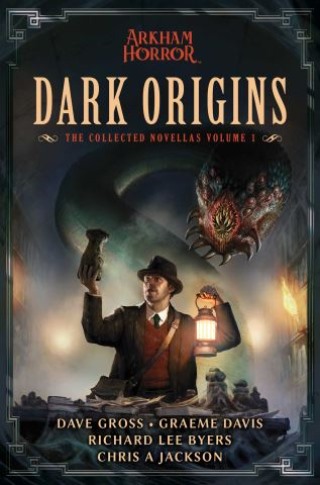 The Ancient Ones are coming to consume our world, and only the bold investigators of Arkham Horror stand in their way, in this chilling collection of eldritch novellas.

The Dirge of Reason by Graeme Davis – for federal agent Roland Banks, investigating a bizarre incident exposes him to the supernatural horrors of Arkham.

Ire of the Void by Richard Lee Byers – the astronomer and professor Norman Withers finds himself the subject of a strange creature’s gaze when he agrees to assist in a fellow scientist’s weird experiment.

The Deep Gate by Chris A Jackson – sailor Silas Marsh must return to Innsmouth and confront his harrowing nightmares when he stumbles on a tome foretelling the end of the world.

Dave Gross: Erstwhile teacher, editor, and game designer, Dave Gross is the author of Forgotten Realms, Iron Kingdoms, and Pathfinder Tales novels. His stories appear in anthologies including Shotguns vs. Cthulhu, Shattered Shields, and Champions of Aetaltis. He lives with his wife and their critters near the North Saskatchewan River.|||GRAEME DAVIS discovered the Cthulhu Mythos in 1982 after picking up an imported first edition of Chaosium’s Call of Cthulhu RPG. He helped develop Warhammer Fantasy Roleplay and Vampire: The Masquerade, and he has written Cthulhu Mythos gaming material for several publishers. He is also the author of a Dungeons & Dragons novel and several published short stories.|||RICHARD LEE BYERS is the author of over fifty fantasy and horror novels, including a dozen set in the Forgotten Realms universe. A resident of the Tampa Bay area, the setting for many of his horror stories, he spends much of his free time fencing and playing poker.|||CHRIS A JACKSON has been a sailor, writer, and gamer. His many novels include award-winning nautical fantasy novels, Pathfinder Tales novels, and the Kindle bestselling series, Weapon of Flesh. He’s also branched into contemporary fantasy with Dragon Dreams, set in Ed Greenwood’s world of Hellmaw.