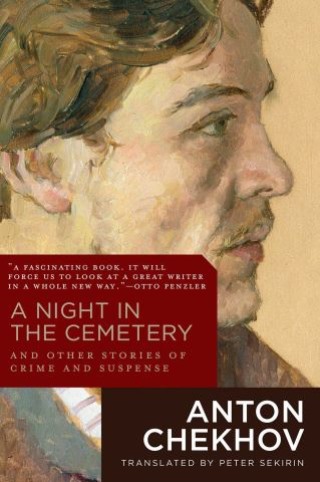 A Night in the Cemetery

Anton Chekhov’s only collection of crime and mystery stories.

Considered one of the greatest dramatists of all time, Anton Chekhov began his literary career as a crime and mystery writer. Scattered throughout periodicals and literary journals from 1880-1890, these early psychological suspense stories provide a fresh look into Chekhov’s literary heritage and his formative years as a writer.

In stories like "A Night in the Cemetery," "Night of Horror," and "Murder," not only will Chekhov’s dark humor and twisted crimes satisfy even the most hardboiled of mystery fans, readers will again appreciate the penetrating, absurdist insight into the human condition that only Chekhov can bring. Whether it is the death of a young amateur playwright at the hands of an editor who hates bad writing, or a drunken civil servant who ends up trapped in a graveyard, these stories overflow with the unforgettable characters and unique sensibility that continue to make Chekhov one of the most fascinating figures in literature.

Anton Chekhov: Anton Chekhov was born on January 29, 1860 in Taganrog, Russia. He graduated from the University of Moscow in 1884. Chekhov died of tuberculosis in Germany on July 14, 1904, shortly after his marriage to actress Olga Knipper, and was buried in Moscow.