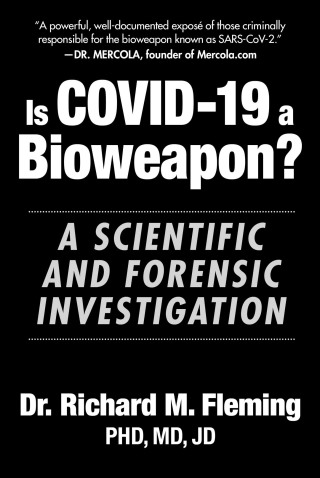 Is COVID-19 a Bioweapon?

A Scientific and Forensic investigation

What is the true origin of COVID-19?

President Joe Biden has ordered US intelligence agencies to further investigate the origins of COVID-19. Clearly, the US government isn't decided on what really happened at the start of the pandemic. Was it truly a animal to human transmission to be blamed on a bat in a Wuhan, China wet market? Or was a much more sinister plan at work?

In 2020, Dr. Richard M. Fleming began investigating SARS-CoV-2/COVID-19. Using both his "Inflammation" Theory and Patent (FMTVDM; the first method capable of measuring regional blood flow and metabolic changes occurring inside the body, which makes it possible to accurately determine what is happening inside the body as well as whether treatments prescribed for patients are working or not), he investigated COVID treatments. Simultaneously he began investigating the origins of COVID-19. This book details much of what he has found.

What he discovered will shock you.

By 1999, US Federal Agencies began funding Gain-of-Function research. Research that by its very nature is designed to increase the ability of pathogens to infect and harm people. In 2019, one of those pathogens was intentionally released upon the world in the Wuhan Wet Market. The key to proving and understanding this bioweapon is its spike protein. The very same spike protein now being made in millions of people after the COVID vaccines are injected into them. These vaccines are nothing more than the genetic code of this bioweapon. This book traces the publication and money trail of COVID-19; showing who is ultimately criminally responsible for the design and development of this weapon, which violates the Biological Weapons Convention (BWC) Treaty, exposing those who have committed crimes against humanity. Dr. Fleming will reveal the ultimate conspiracy: one that puts the future of the entire world at stake.

Richard M. Fleming: Dr. Richard M. Fleming is a physicist, nuclear cardiologist, and attorney with fifty-three years of research experience. He has spent decades investigating what causes multiple health problems including heart disease, cancer, and SARS-CoV-2/COVID-19. He joined the American Heart Association in 1976 and actively began teaching and researching heart disease; including both what causes heart disease and how to accurately find heart disease. In 1994 he presented his original theory on "Inflammation and Heart Disease" which was published in a cardiology textbook in 1999 and presented on 20/20 in 2004. His research career has also involved investigating and correcting errors made in medical testing including coronary arteriography and nuclear imaging; for both heart disease and cancer. In 2017 after two decades of work he patented the first method capable of measuring regional blood flow and metabolic changes occurring inside the body. This method known as FMTVDM (Fleming Method) makes it possible to accurately determine what is happening inside the body as well as whether treatments prescribed for patients are working or not. In 2004 after reducing the amount of radiation he was giving patients for nuclear imaging tests of the heart he was accused of billing fraud. After evidence was hidden from the jury he agreed to a plea deal that did not state a crime making it possible for him to protect one of his children.