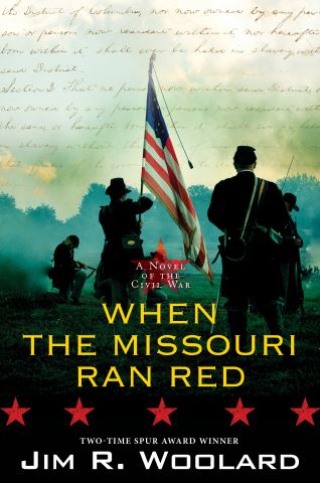 When the Missouri Ran Red

A Novel of the Civil War

Set in the final devastating months of the American Civil War, this powerhouse of a novel from award-winning author Jim R. Woolard follows one man’s harrowing journey from Confederate captive to Union prisoner to unchained force of vengeance . . .

Autumn, 1864. Rebel bushwhackers have seized and looted a small town in Missouri. Wounded and left for dead by his half-brother, seventeen-year-old Owen Wainwright is captured and conscripted by the Confederate Army. As the troops’ blacksmith, he witnesses the horrors of war firsthand: the savagery of General Selby’s Iron Brigade, the massacres of Union troops, the bloody battles at Lexington, Westport, and Mine Creek. Against all odds, Owen survives with the help of an unlikely ally—a new friend in arms and the only person he trusts. But if fate is cruel, war can be crueler . . .

Caught in the crossfire of a deadly Yankee ambush, Owen is arrested and jailed in a Union prison. Beaten and brutalized by guards, he begins to give up hope—until a U.S. Marshal comes to him with an unusual offer. Owen’s traitorous half-brother is wanted for murder. If Owen agrees to help the U.S. Marshal infiltrate the Texas winter camp of Confederate guerillas—and bring his brother to justice—Owen will have both his freedom and his revenge. But the risks are great. The price of getting caught is death.

Filled with raw human drama, blistering battle scenes, and vivid historical details, When the Missouri Ran Red is destined to be a classic in the field and a treasure for Civil War buffs.

Jim R. Woolard:
Jim R. Woolard is an acclaimed historian and award-winning author of historical novels including When the Missouri Ran Red; Raiding with Morgan; Riding for the Flag; Cold Moon; and Feathered Tide. With a PhD in frontier history from Ohio State University, he is known for portraying life on the American frontier in all its harsh beauty and danger. He is a two-time Spur Award winner and the recipient of the prestigious Western Writers of America Medicine Pipe Award for Thunder in the Valley. Visit him online at JimRWoolard.com.