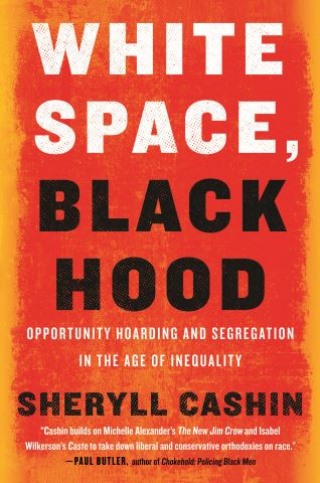 Opportunity Hoarding and Segregation in the Age of Inequality

Shows how government created “ghettos” and affluent white space and entrenched a system of American residential caste that is the linchpin of US inequality—and issues a call for abolition.

The iconic Black hood, like slavery and Jim Crow, is a peculiar American institution animated by the ideology of white supremacy. Politicians and people of all colors propagated “ghetto” myths to justify racist policies that concentrated poverty in the hood and created high-opportunity white spaces. In White Space, Black Hood, Sheryll Cashin traces the history of anti-Black residential caste—boundary maintenance, opportunity hoarding, and stereotype-driven surveillance—and unpacks its current legacy so we can begin the work to dismantle the structures and policies that undermine Black lives.

Drawing on nearly 2 decades of research in cities including Baltimore, St. Louis, Chicago, New York, and Cleveland, Cashin traces the processes of residential caste as it relates to housing, policing, schools, and transportation. She contends that geography is now central to American caste. Poverty-free havens and poverty-dense hoods would not exist if the state had not designed, constructed, and maintained this physical racial order.

Cashin calls for abolition of these state-sanctioned processes. The ultimate goal is to change the lens through which society sees residents of poor Black neighborhoods from presumed thug to presumed citizen, and to transform the relationship of the state with these neighborhoods from punitive to caring. She calls for investment in a new infrastructure of opportunity in poor Black neighborhoods, including richly resourced schools and neighborhood centers, public transit, Peacemaker Fellowships, universal basic incomes, housing choice vouchers for residents, and mandatory inclusive housing elsewhere.

Includes historical photos, maps, and charts that illuminate the history of residential segregation as an institution and a tactic of racial oppression.

Sheryll Cashin: Sheryll Cashin is an acclaimed author who writes about the US struggle with racism and inequality. Her books have been nominated for the NAACP Image Award for Nonfiction, the Hurston/Wright Legacy Award for Nonfiction, and an Editors’ Choice in the New York Times Book Review. Cashin is the Carmack Waterhouse Professor of Law, Civil Rights and Social Justice at Georgetown University and an active member of the Poverty and Race Research Action Council. A law clerk to US Supreme Court justice Thurgood Marshall, Cashin also worked in the Clinton White House as an advisor on community development in inner-city neighborhoods. She is a contributing editor for Politico Magazine and currently resides in Washington, DC, with her husband and twin sons. Follow her at sheryllcashin.com and on Twitter (@sheryllcashin).