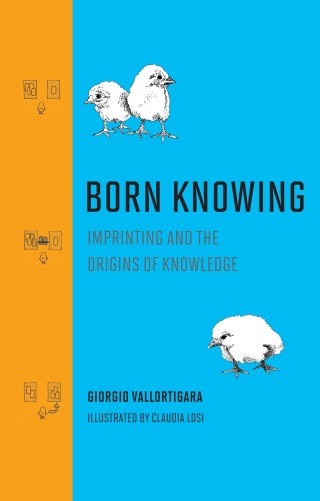 Imprinting and the Origins of Knowledge

An expert on the brain argues that the mind is not a blank slate and that much early behavior is biologically predisposed rather than learned.

Why do newborns show a preference for a face (or something that resembles a face) over a nonface-like object? Why do baby chicks prefer a moving object to an inanimate one? Neither baby human nor baby chick has had time to learn to like faces or movement. In Born Knowing, neuroscientist Giorgio Vallortigara argues that the mind is not a blank slate. Early behavior is biologically predisposed rather than learned, and this instinctive or innate behavior, Vallortigara says, is key to understanding the origins of knowledge.

Drawing on research carried out in his own laboratory over several decades, Vallortigara explores what the imprinting process in young chicks, paralleled by the cognitive feats of human newborns, reveals about minds at the onset of life. He explains that a preference for faces or representations of something face-like and animate objects--predispositions he calls "life detectors"--streamlines learning, allowing minds to avoid a confusing multiplicity of objects in the environment, and he considers the possibility that autism spectrum disorders might be linked to a deficit in the preference for the animate. He also demonstrates that animals do not need language to think, and that addition and subtraction can be performed without numbers. The origin of knowledge, Vallortigara argues, is the wisdom that humans and animals possess as basic brain equipment, the product of natural history rather than individual development.

Giorgio Vallortigara: Giorgio Vallortigara is Professor of Neuroscience and Head of the Animal Brain and Cognition Laboratory at the Centre for Mind/Brain Sciences of the University of Trento, Italy. He is the coauthor of Divided Brains: The Biology and Behaviour of Brain Asymmetries.