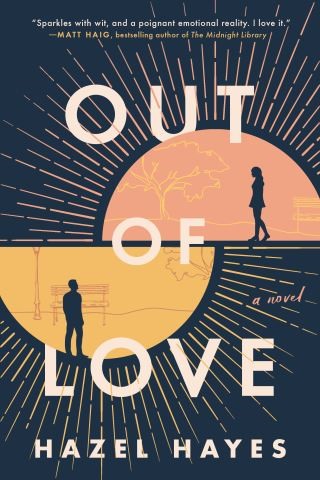 One of E! News' 13 Books to Read This September | One of Bookish's Debuts to Read in the Second Half of 2021 | One of Medium's Best Releases Out Today

“Hazel Hayes writes with such honesty and casual confidence and flowing dialogue, you feel you are overhearing it rather than reading it. The writing sparkles with wit and a poignant emotional reality. I love it.”—Matt Haig, bestselling author of The Midnight Library

For anyone who has loved and lost, and lived to tell the tale, this gorgeously written debut is a love story told in reverse, a modern novel with the heart of a classic: truthful, tragic, and ultimately full of hope.

Out of Love begins at the end. A couple call it quits after nearly five years, and while holding a box of her ex-boyfriend’s belongings, the young woman wonders: How could they have spent so long together? When did they fall out of love? Were there good times before the bad? These are the questions we obsess over when a relationship ends, even when obsessing can do no good. But instead of moving forward through the emotional fallout of a break-up, Out of Love moves backward in time, weaving together an already unraveled tapestry, from tragic ending to magical first kiss. Each chapter jumps further into the past, mining their history for the days and details that might help us understand love; how it happens and why it sometimes falls apart.

Readers of Normal People; Goodbye, Vitamin; and One Day will adore this bittersweet romance, a sparkling debut that you won’t want to miss.

Hazel Hayes: Hazel Hayes is an Irish-born, London-based writer and director who has, until now, been writing primarily for the screen. Having graduated from Dublin City University with a degree in journalism, she went on to study creative writing at the Irish Writers Centre before finally finding her feet online and honing her craft as a screenwriter through numerous short films and series. Her eight-part thriller, PrankMe, won Series of the Year at Social in the City, as well as the award for Excellence in Storytelling at Buffer Festival in Toronto. Out of Love is her first novel. When asked why she wanted to make the leap from thriller and horror to a love story, Hazel said she could think of nothing more horrific than love.